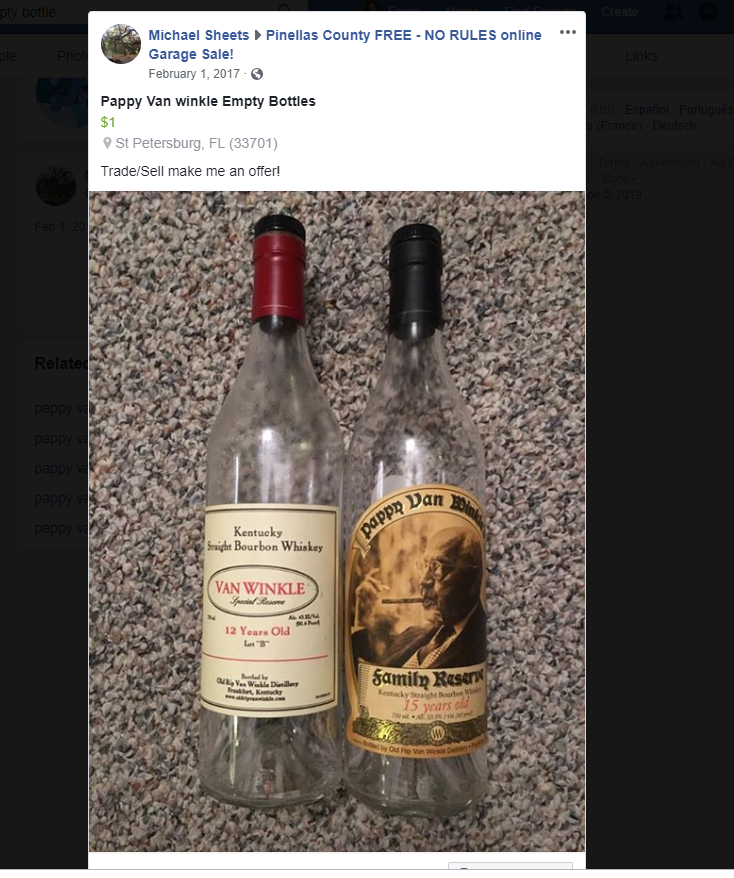 All sales of alcohol and tobacco will no longer be allowed between users on Facebook and Instagram.

“We are updating our regulated goods policy to prohibit the sale of alcohol and tobacco products between private individuals on Facebook and Instagram. Our commerce policies already prohibit the sale of tobacco or alcohol in places like Marketplace but we’re now extending this to organic content,” a Facebook spokesperson said in an emailed statement on Thursday.

Sazerac CEO Mark Brown accused Facebook, eBay and Craigslist of allowing private individuals to sell counterfeit bottles of the company’s Pappy Van Winkle bourbon as well as empty bottles of the high-priced spirit that are later used by counterfeiters.

Illicit spirits, including counterfeits of brands and tainted mixtures, are a global health concern. The Costa Rican Health Ministry said alcohol tainted with methanol has caused the deaths of 20 people in Costa Rica since June. At least nine Americans have died in the Dominican Republic this year. Investigators have included counterfeit and tainted alcohol as possible causes.

Experts say the U.S. has a three-tiered distribution system for spirits, and those regulations help protect consumers from  buying tainted alcohol.

“Craigslist, Facebook and eBay are enabling a bypass of our system and are introducing risk into the system that we are going to have a methanol, counterfeiting problem in the U.S.,” Brown said in an interview aired on “Power Lunch.”

CNBC was able to find multiple listings on each site from recent years for empty bottles of Pappy Van Winkle, Macallan scotch whisky, Louis XIII cognac and other high-end spirits.

Facebook said user sales of alcohol and tobacco are already prohibited in its Marketplace and other locations on the site.

eBay only allows the sale of alcohol by preapproved and licensed wine sellers. Craigslist did not respond to a request for comment.

The Wine & Spirits Wholesalers of America held a briefing on illicit alcohol on Capitol Hill on Thursday. The WSWA said illicit alcohol costs spirits companies an estimated $45 billion to $50 billion a year in lost profits.