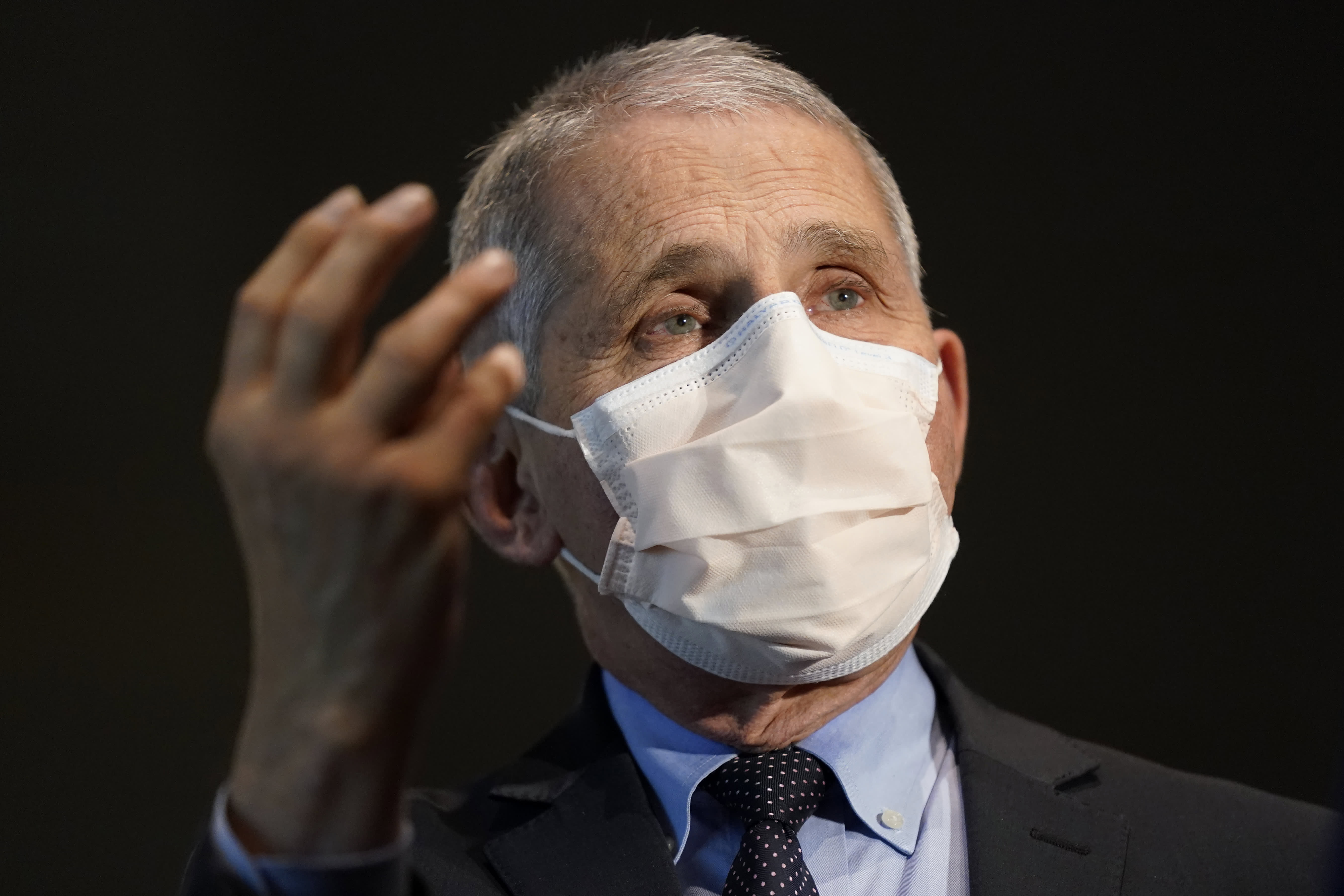 Anthony Fauci, director of the National Institute of Allergy and Infectious Diseases, speaks with Alex Azar, secretary of Health and Human Services (HHS), not pictured, before they receive the Moderna Inc. Covid-19 vaccine during an event at the NIH Clinical Center Masur Auditorium in Bethesda, Maryland, U.S., on Tuesday, Dec, 22, 2020. The National Institutes of Health is holding a livestreamed vaccination event to kick-off the organization’s efforts for its employees on the front line of the pandemic. Photographer: Patrick Semansky/Associated Press/Bloomberg via Getty ImagesBloomberg | Bloomberg | Getty ImagesThe slower-than-expected Covid vaccine rollout in the United States has been disappointing, according to Dr. Anthony Fauci, director of the National Institute of Allergy and Infectious Diseases.Officials from Operation Warp Speed, President Donald Trump’s vaccine program, had said the country would immunize 20 million people with the first of the two-dose Covid-19 vaccine in December. But the Centers for Disease Control and Prevention says that of more than 12.4 million doses distributed, just under 2.8 million have actually been administered.”We would’ve liked to have seen it run smoothly and have 20 million doses into people today, by the end of the (year) 2020, which was the projection. Obviously, it didn’t happen and that’s disappointing,” Fauci said Thursday on NBC’s “TODAY” show. “Hopefully, as you get into the first couple of weeks in January, the gaining of momentum will get us to the point where we want to be.”States and counties need more resources to accelerate the pace of vaccination, Fauci said. Trump in recent days has defended his administration’s rollout by saying it’s the responsibility of the states to administer the shots once they’re delivered by Operation Warp Speed.Michael Pratt, a spokesman for the program, said earlier this week that the CDC’s data is likely off due to delays in reporting.”Operation Warp Speed remains on track to have approximately 40 million doses of vaccine and allocate 20 million doses for first vaccinations by the end of December 2020, with distribution of the 20 million first doses spanning into the first week of January as states place orders for them,” he said in a statement.Dr. Paul Offit, director of the Vaccine Education Center at Children’s Hospital of Pennsylvania, told CNN on Thursday that the federal government invested massively in vaccine development but has failed to match that effort when it comes to distribution and administration.”The urgency that we brought to making a vaccine and the money that we brought to making a vaccine, we spent $24 billion doing essentially a Manhattan Project-like response. … That’s the vaccine part,” he said. “Now comes the vaccination part, which is equally hard and is equally going to go to require this Manhattan Project-like response.””The federal government does need to step up their response to vaccination in the same way that they stepped up the response to making the vaccine,” said Offit, a voting member of the Food and Drug Administration’s Vaccines and Related Biological Products Advisory Committee.Dr. Jonathan Reiner, professor of medicine and surgery at George Washington University school of medicine and health services, is calling for “mass vaccination” events. He said the government should consider turning places like election polling stations, football stadiums and race tracks into temporary vaccination clinics.”We need to be vaccinating about 2 million people a day … as opposed to 150,000 people a day. And I just don’t see the urgency,” he told CNN on Thursday.Also Thursday, New York Mayor Bill de Blasio said the city will use schools, pop-up clinics and “whatever it takes” to administer 1 million vaccinations by the end of January. “We need to go into mass vaccination mode, and we need to do it now.”

West Virginia mistakenly gives 42 people Regeneron IV Covid treatment instead of vaccine shot
Mega Millions jackpot jumps to $432 million. What to do if you win
To Top
error: Content is protected !!