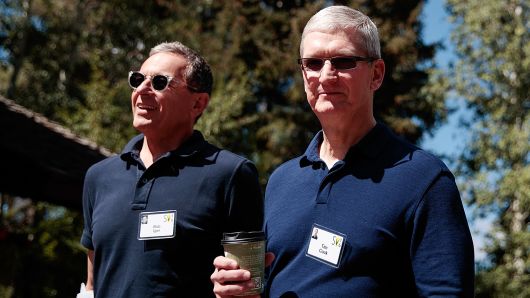 Compare that with Apple’s 35 or so original shows and movies: A handful of series, none of which are major existing franchises, that Apple is bankrolling from scratch. A TV comedy called “The Morning Show” and an anthology produced by Steven Spielberg called “Amazing Stories” are Apple’s flagship scripted shows. Apple isn’t expected to buy licenses for third-party content like Netflix does.

There are some huge names attached to Apple productions, but even if Apple’s shows wildly exceed expectations, it’s still going to take years to build up fanbases like Disney’s properties.

Apple hasn’t revealed a price or release date for Apple TV+, which will enable it to pivot in response to Disney if it wants. Apple hasn’t even confirmed if it will charge for Apple TV+, although the company’s marketing language strongly suggests it will. Apple’s two current content subscriptions, for news and music, both cost $10 per month.

Consumers are already complaining that they pay for too many content subscriptions. People could end up passing on Apple for Disney’s superior content, especially if it ends up being less expensive than Apple.

Apple could end up returning to its original content plan: Giving away shows for free as part of its digital TV strategy, and creating a platform to charge viewers for subscriptions to legacy media companies, including Disney.

Apple and Disney have historically been eager to partner with each other. Disney CEO Bob Iger is on Apple’s board of directors, and he said Thursday that Disney+ will most likely be available on Apple devices, including its TV box. (Iger also said he recuses himself from all discussions about streaming services at Apple.)

In that scenario, Apple would be able to focus on one of its core strengths: Building a platform for other companies to reach the masses of Apple users, best summed up by Oprah Winfrey at Apple’s TV launch: “They’re in a billion pockets, y’all.”

Lyft stock plunges as investors get a first look into Uber’s finances
Netflix is falling on concerns of competition from Disney+
To Top
error: Content is protected !!