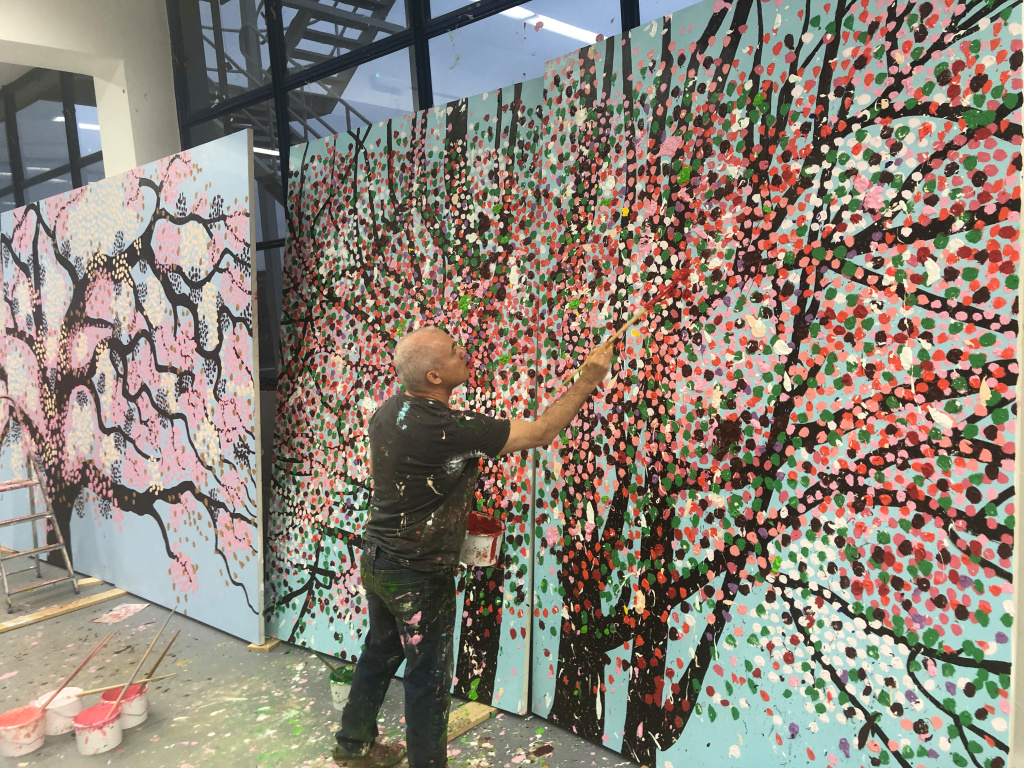 In an attempt to grapple with claims that the sale of NFTs consumes too much energy, a new digital marketplace called Palm has debuted with the aim of being more ecologically efficient. To kick off the platform, Palm has tapped major talent: artist Damien Hirst, whose work is known for its shock tactics.
His work for Palm will be The Currency Project. Five years in the making, The Currency Project is comprised of 10,000 oil paintings on paper, each of which is accompanied by its NFT, or a non-fungible token, a digital file that is authenticated by the blockchain. The series explores the conflation of art and wealth—an appropriate theme for an artist known for diamond-encrusted skulls, which have broken records at auction. The pricing model for The Currency Project has not yet been disclosed.

In a statement, Hirst said, “Palm is by far the best platform for me. It’s new and art focused, it’s the most environmentally friendly, and it is quicker and cheaper to use. With Palm, artists can invent the future.”
Created by Joe Hage, the owner of Heni Publishing, and David Heyman, the founder of Heyday Films, Palm claims to be 99 percent more energy-efficient than Ethereum. Ethereum, meanwhile, is in the process of transitioning to a greener model.
This isn’t Hirst’s first foray into the blockchain. Earlier this month, he unveiled a series of eight prints called “The Virtues,” available for purchase via cryptocurrency on Heni Leviathan, an online marketplace for contemporary art. The works, each depicting cherry blossoms in bloom and priced at $3,000, were only available for sale for one week. Hirst has been one of the few high-profile artists—whose sales are usually handled by blue-chip galleries or auction houses—to embrace cryptocurrency.
NFT mania set in this past March, when Mike Winkelmann, an artist who works under the moniker Beeple, offered the digital collage Everydays: The First 5000 Days at Christie’s. Bidding began at $100 and went on to exceed $69 million. In the past, galleries have struggled to market online-only artworks, but the Beeple sale provided a blueprint for future ventures.
Palm joins other relatively new online marketplaces such as Nifty Gateway (another Ethereum-based site), SuperRare, and Foundation, which provide artists a unique signature that represents their artwork.

The full ecological cost of NFTs is still being determined, though current data suggests that sales of these works can have a negative impact on the environment. According to research by artist and computer scientist Memo Akten, the drop of one NFT on a platform like SuperRare, created about 211 kg of CO₂.