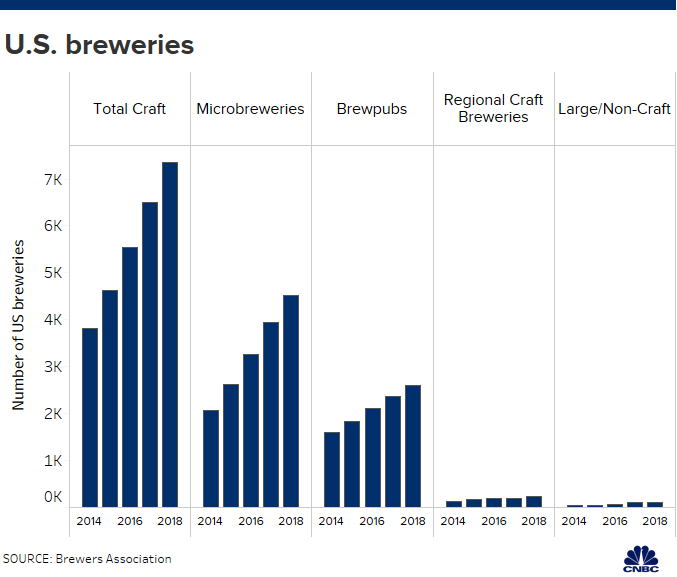 It was the mid-1990s and craft beer was a small niche market. While most people were drinking big labels like Budweiser and Miller, Grateful Dead fans had a taste for independent labels like Sierra Nevada and Samuel Adams.

“Deadheads were always ahead of the curve in terms of quality,” Castore said.

Castore developed a love for beer at those concerts. Over the next decade, he turned that passion from a parking lot hustle into one of the first craft beer bars in Columbus, Ohio.

Castore eventually sold his bar to focus on brewing and co-founded Seventh Son Brewing Co. in 2013. There were about seven breweries in the Columbus area when Seventh Son opened, Castore said. Today, there are 55 in central Ohio. Nationwide, the industry has exploded from about 1,500 craft breweries in 2000 to 7,450 in 2018.

“We got a hockey-stick growth to brewing industry right now,” said Bill Nootenboom, president of Stout Tanks and Kettles in Portland, Oregon. “The way people are consuming beer is changing — they’re doing it in neighborhood taverns.”

But independent craft brewers are increasingly concerned about headwinds as President Donald Trump’s tariffs increase prices on everything from aluminum cans to brewing equipment.

“There’s really likelihood that fewer brewers can open,” said John Watt, founder of Stout Tanks and Kettles. “These are start-ups that a lot of the time are borrowing money from an uncle or parents. Darn near everything they need to buy is going to be impacted.”

‘We can’t just keep eating it’

The problems started for craft brewers more than a year ago, when Trump imposed a 25% tariff on steel and a 10% tariff on aluminum in March 2018.

Castore says the price he pays for an aluminum can has increased from about 15 to 18 cents to about 19 to 24 — depending on how the can is treated.

Between Seventh Son and his other brewery, Antiques on High, Castore’s business produces about 7,000 barrels and sells 800,000 cans of beer a year throughout Ohio. He estimates increased can prices are costing him about $16,000 a year. For now, Castore hasn’t passed that on to consumers, but that will change if aluminum can prices continue to increase.

“If it goes up another 20% we’ll have to figure something out — we can’t just keep eating it,” he said.

Castore isn’t alone. Rob Burns, co-founder and president of Night Shift Brewing in Everett, Massachusetts, says aluminum can prices have increased 16% since 2016 or about 2 cents.

Founded in 2012 by Burns and two buddies with about $125,000 borrowed from family and friends, Night Shift expects to brew 40,000 barrels this year or about 13.2 million cans of beer. Overall, Burns says his costs will go up by about $264,000 this year due to the increase in aluminum can prices alone.

The business environment for craft brewers, particularly those just starting out, is about to get more challenging. The Trump administration is imposing 15% tariffs on $112 billion of goods imported from China starting Sept. 1, including brewery equipment. Last year, the U.S. imported $35 million of brewery equipment from China.

Watt has helped more than 1,000 smaller-sized breweries get up and running across the U.S. since he founded Stout Tanks and Kettles a decade ago. Watt has hands-on experience on the supply and brewing sides of the industry. Before Stout, he founded Sonoran Brewing Co. in Phoenix, which he operated for about a decade before selling it and moving back to Oregon, his home state.

Stout Tanks and Kettles works with start-up breweries to design equipment to their custom specifications. Stout sources its tanks from two factories on China’s east coast close to the ports. The smaller tanks that microbreweries use are labor intensive to fabricate, Watt said, and manufacturing the same equipment in the U.S. would be cost prohibitive for start-up businesses that are often family owned. 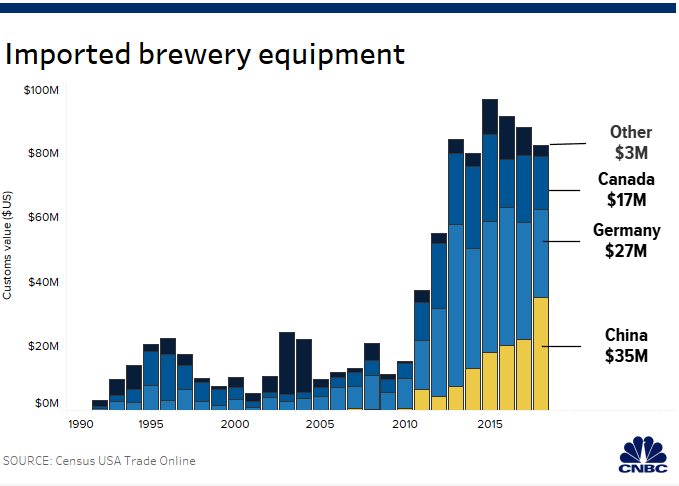 “You could never afford to open a business if you had to pay double for same equipment,” he said.

With the 15% tariffs looming, Watt said he will have to increase prices and that means it is going to be more expensive for his customers to get into the brewing business.

“We don’t have really big margins so the bottom line is we have to raise our prices,” Watt said.

Adrian Sawczuk is already running into this problem. He and his wife Dara have had plans to open a brewery in Myrtle Beach, South Carolina, for about two years now. Tidal Creek Brewhouse is slated as a 10-barrel operation that will make craft beverages in house. They’ve leased property and are going through the permitting and contracting process, but the tariffs have forced them to alter some of their plans.

Sawczuk planned to order $300,000 of brewery equipment from China. Now, he is scaling back his plans by reducing the number of fermentation tanks. He says this will reduce production from 3,000 barrels to 1,000 barrels of beer, or 66%. The brewery’s opening has also been delayed until the first quarter of 2020 and Sawczuk says he’ll likely hire fewer people.

“That money in my mind is just an unjustified tax,” Sawczuk said of the tariffs.

Castore and Burns, for their part, don’t expect to take a hit right away because they operate established breweries that already made major capital investments. But Seventh Son and Night Shift do have plans to buy more equipment to keep up with demand as they continue to grow.

Night Shift, for example, has big plans to open a new facility in Philadelphia in 2020 that will have a 30,000 barrel capacity from day one and can scale up to 200,000 barrels.

“It definitely factors into purchasing decisions,” Burns said of the tariffs. “We bought Chinese equipment in the past because it’s good quality and usually the fastest available equipment and often at the lowest price.”

Castore said Seventh Son is already putting off some purchases, such as higher-end lab equipment, as the company tightens its belt in response to the tariffs. “As we grow it will definitely affect us,” he said.

For Sawczuk, the abrupt increases in the tariff rates have created uncertainty that makes planning difficult.

Another big private insurer just weighed in on ‘Medicare for All’