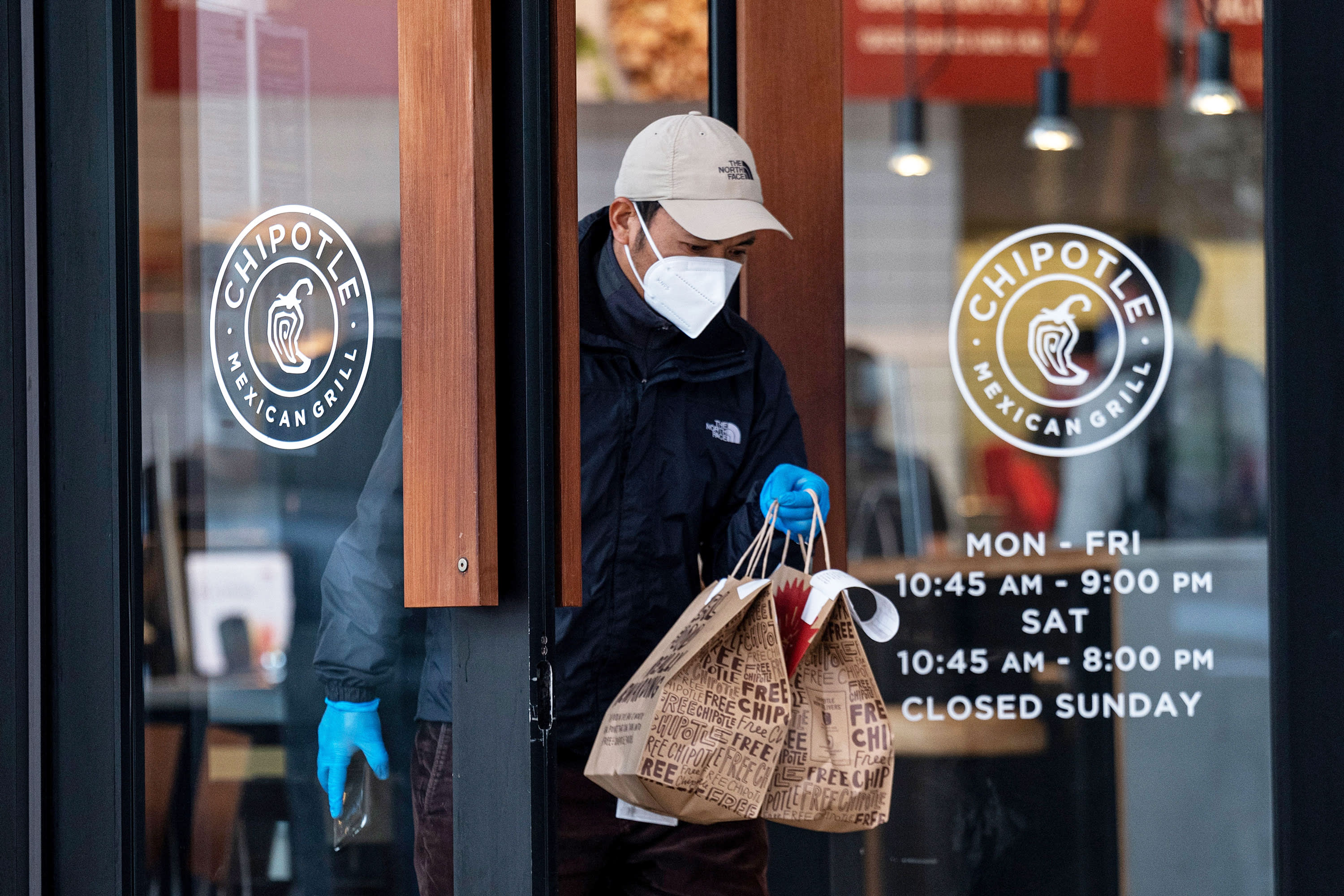 Chipotle Mexican Grill on Tuesday reported quarterly revenue that surpassed pre-pandemic levels as dine-in customers returned to its restaurants.The company also released a same-store sales forecast for its third quarter.Shares rose 4% in extended trading.Here’s what the company reported compared with what Wall Street was expecting, based on a survey of analysts by Refinitiv:Earnings per share: $7.46 adjusted vs. $6.52 expectedRevenue: $1.89 billion vs. $1.88 billion expectedChipotle reported fiscal second-quarter net income of $188 million, or $6.60 per share, up from $8.2 million, or 29 cents per share, a year earlier. Food and beverage costs fell nearly 3% from a year ago due to menu price hikes and lower beef prices.Excluding restaurant asset impairments, closure costs, and other items, the burrito chain earned $7.46 per share, topping the $6.52 per share expected by analysts surveyed by Refinitiv.Net sales rose 38.7% percent to $1.89 billion, beating expectations of $1.88 billion. Same-store sales climbed 31.2%. A year ago, the company’s same-store sales fell more than 9% after lockdowns hit demand.After online orders skyrocketed last year, Chipotle has seen growth for that part of its business slow. Digital sales jumped 10.5%, making up 48.5% of the company’s quarterly sales. In the first quarter, Chipotle’s online orders overtook its in-person sales for the first time.”I fully expect the percentage to probably go down a little bit as the dining rooms come back,” CEO Brian Niccol said on CNBC’s “Closing Bell” on Tuesday. “The thing that I keep an eye on are the absolute dollars that we’re doing in our digital business.”The popularity of Chipotle’s digital-only quesadillas, which launched in March, has helped boost online sales. Niccol said that one in 10 transactions includes a quesadilla order.Niccol said that dining room sales are roughly 70% of 2019 levels, while the company has held onto about 80% of the gains in its digital orders. He also said that lunch customers are returning.Chipotle opened 56 new locations and closed five restaurants during the quarter. Forty-five of the new restaurants have “Chipotlanes,” which is what the company calls its drive-thru lanes that are only for digital order pickup. Executives said that restaurants with Chipotlanes have 20% higher sales when they open compared to locations without a drive-thru lane.Looking ahead to the third quarter, the company said that it is forecasting same-store sales growth in the low-to-mid double digits, assuming that current trends continue. During the third quarter of 2020, same-store sales rose 8.3%. Niccol said that the delta Covid variant hasn’t affected consumer behavior yet.CFO Jack Hartung told analysts that the company is predicting higher food costs next quarter, due to higher beef and freight prices and staffing shortages at its suppliers.”Over the next few quarters, we’ll have greater visibility on how much of this inflation is permanent versus transitory and we can take the appropriate actions as needed to help offset any lasting impacts,” he said.