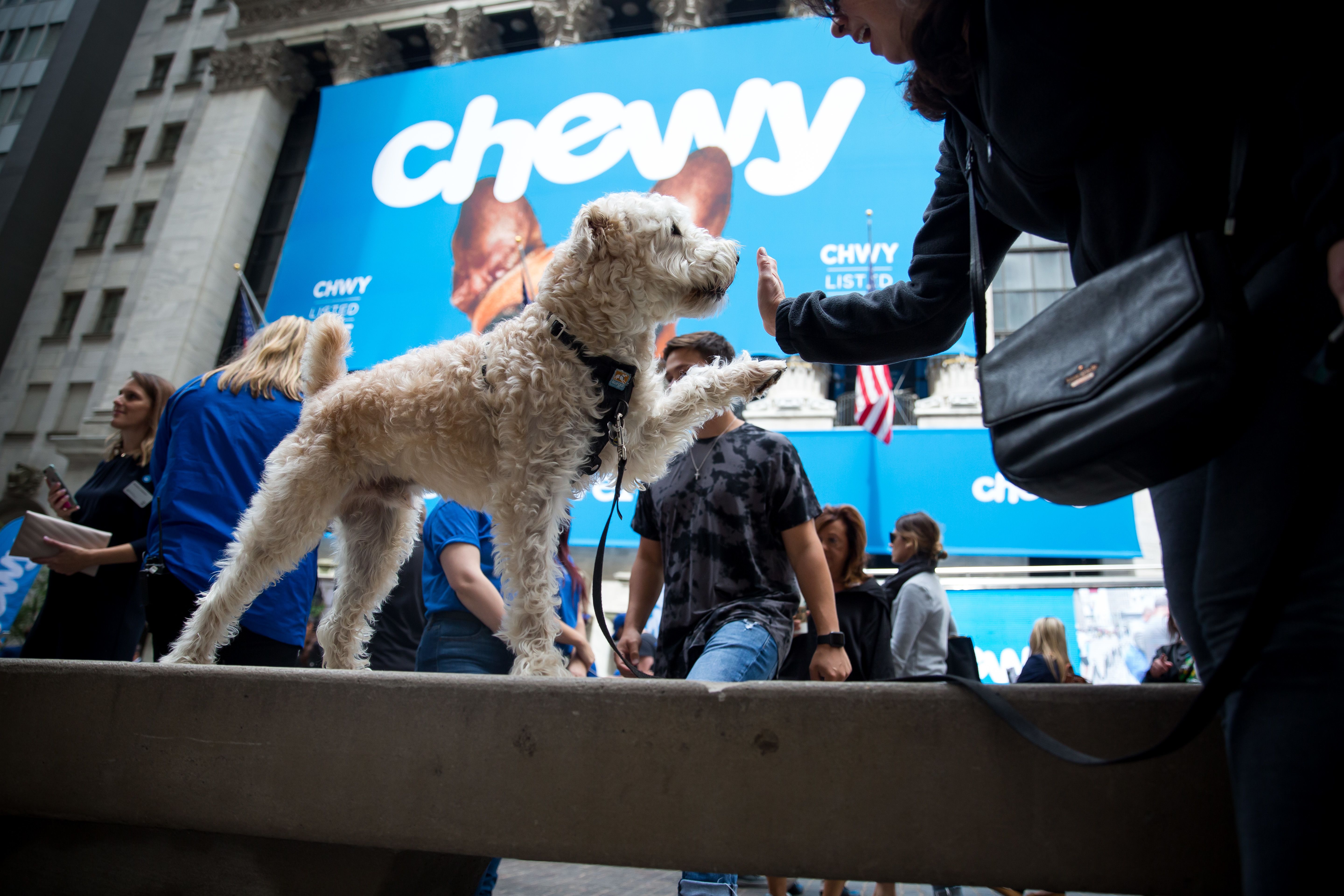 Shares of Chewy, the online pet product retailer owned by PetSmart, soared as much as 86% Friday after the company made its public debut.

The retailer’s stock opened Friday at $36, giving the company a market capitalization of $14.3 billion. Chewy closed its first trading day at $34.99 per share, trading 59% above its IPO price.

On Thursday night, Chewy priced 46 million shares at $22 apiece, above the indicative range of $19 to $21 that it had given. The amount of stock offered in the deal was 5 million more than expected, and raised $1 billion.

Chewy, founded in 2011 by Ryan Cohen and Michael Day, calls itself the “largest pure-play pet e-tailer in the United States.” It has distinguished itself from many of its competitors with customer service that includes 24/7 access and two-day shipping of online orders.

Its loyal customer base, 60% growth rate and $3.5 billion in sales, helped it to attract investors in its IPO, said Kathleen Smith, principal at Renaissance Capital, which manages IPO-focused exchange traded funds.

“Today, in the United States, we’re only about 14% penetrated from an online point of view,” Chewy CEO Sumit Singh said on CNBC’s “Squawk on the Street ” before the company began trading. “Chewy, if you look at it — it’s a $70 billion industry — we’re penetrated in about roughly 10% of the households.”

Still, the company is not all positives. The high cost of shipping has eaten into its margins. From fiscal 2017 to 2018, it reported a net loss of $268 million, narrowing from a net loss of $338 million.

After its IPO, parent PetSmart will own about 70% of the company’s common stock and hold 77% voting power. PetSmart, which is backed by private equity firm BC Partners, acquired Chewy in 2017 for $3 billion.

“The acquisition of Chewy made strategic sense for the company as it added online expertise and scale and complements PetSmart’s brick and mortar business while immediately increasing PetSmart’s online penetration,” Moody’s analysts said in a February report. “However, at $3 billion the acquisition of Chewy was financed primarily through additional debt and like most high growth pure play online retailers we estimate Chewy will be EBITDA negative for at least the next 12-24 months.”

Since its sale to PetSmart, Chewy has expanded its private label business and launched “Chewy Pharmacy,” an online pet pharmacy.

Chewy said in its prospectus it will seek continued growth by broadening the array of products it offers, finding new customers and expanding further into pharmacy.

The company is now trading on the New York Stock Exchange under the ticker CHWY.