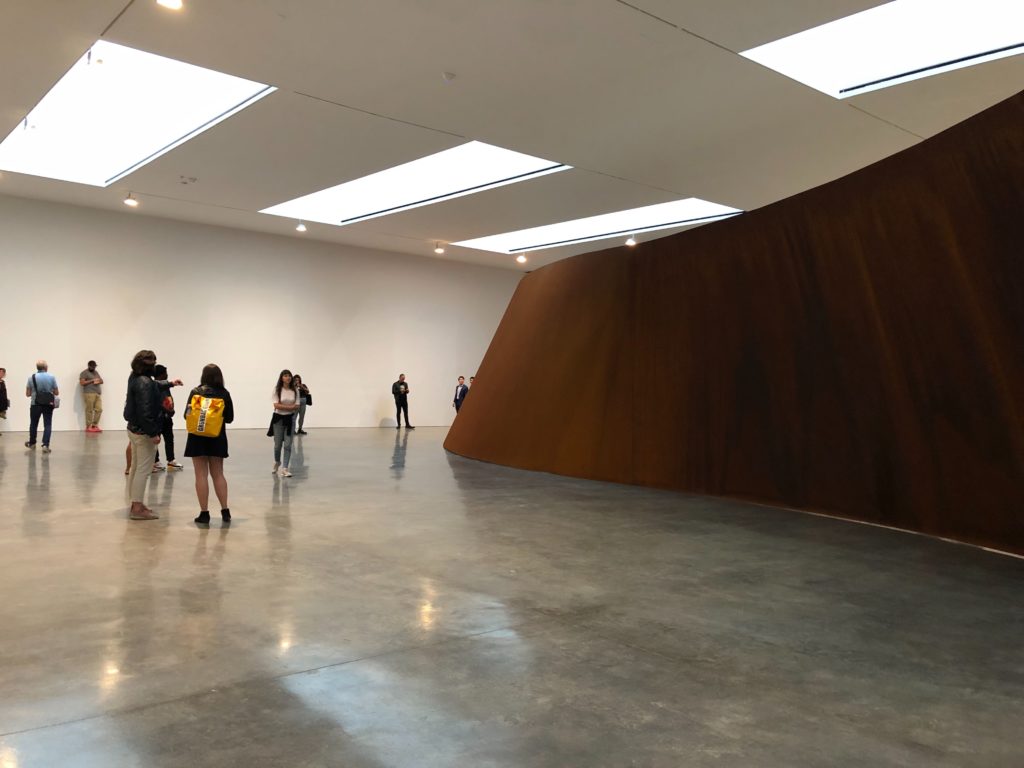 Installation view of “Reverse Curve” at Gagosian’s 21st street location. ANNIE ARMSTRONG/ARTNEWS
Tuesday night marked the opening of a three-part Richard Serra exhibition at Gagosian gallery in New York, with drawings on the Upper East Side and two much-anticipated large-scale steel pieces at two locations in Chelsea. On 21st street, there’s Reverse Curve (2015–19), a Cor-Ten steel mammoth that towers over visitors, and on 24th Street, there’s Forged Rounds (2019), which is arranged like a forest of 50-ton tubular forms. The opening brought out a bevy of art world dignitaries, and ARTnews asked some of them a simple question: Can you describe Richard Serra in three words? (Many respondents required a few more, but they all tried.)
Another question arose while spying the many who could be seen photographing Serra’s new work: Would Tilted Arc—the artist’s giant sculptural intervention on Manhattan’s Foley Federal Plaza that was removed following rampant public controversy in 1981—have stayed on view in the age of Instagram?Answers to both queries follow below.How would you describe Richard Serra in three words?Joan Jonas, artistProfound weight with lightness.Hugh Freund, lawyer specializing in art and museumsHeavyweight art superstar.Jerry Saltz, critic for New York magazineBetween art and a dock.Mary Heilmann, artistReminds me of surfing.Susan Kleinberg, artistTough and beautiful.Bill Powers, founder of Half Gallery Fifty-ton limit.Larry Gagosian, founder of Gagosian galleryIt’s not possible.Would Tilted Arc have remained standing if it were installed in the age of Instagram?Joan JonasNo. I don’t know why, but no.Jerry SaltzTilted Arc was taken down because it succeeded in making its critique of corporate architecture. Would I leave it up today? Sure.Mary HeilmannYes. I suppose people would have liked to take their picture with it.Roberta Smith, co-chief art critic for the New York TimesProbably not. [But] I think it’s an interesting turning point: After that, Richard’s work becomes so much more involved. That was when he started having big shows [with] lines out the door. He changed something, and what he did was make his work really participatory—especially the “Arcs.”

Which Mega-Gallery Took on the Most Artists Over the Past Three Years? -ARTnews