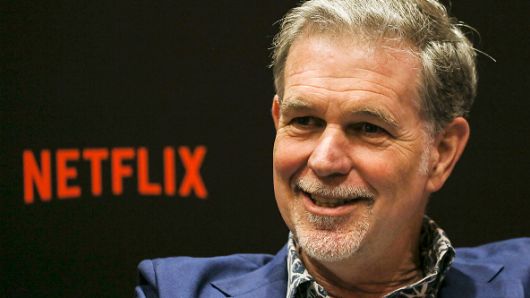 Netflix CEO Reed Hastings speaks during an interview on day two of the Netflix See What’s Next: Asia event at the Marina Bay Sands on November 9, 2018 in Singapore.

Deutsche Bank raised its rating on Netflix shares to buy from hold on Tuesday as it said the streaming service is becoming “more like a platform every day,” rather than just another app on people’s phones.

“Platform status brings network effects not available to peers and competitors. Specifically, this is making Netflix even more of a go-to destination when consumers want to watch something, and it means having Netflix is becoming more of a cultural necessity for people around the world,” Deutsche Bank analyst Bryan Kraft wrote in a note to investors on Tuesday.

“It also makes Netflix a magnet for talent. And it means that consumers stay captive within the Netflix walled garden for significant amounts of time. Aside from pay TV, which is losing audience share, there are no other competing platforms that approach Netflix’s reach,” Kraft added.

Deutsche thinks Netflix is No. 1 among streaming competitors when it comes to battling for talent.

Even as Disney rolls out Disney+, with a myriad of blockbuster offerings, and Amazon, Hulu and HBO continue invest billions in streaming, Netflix remains ahead in attracting talent. Netflix’s ability to secure talent “will continue to feed” the company’s “appetite for high-value original content,” Kraft said.

The firm also believes Wall Street’s estimates for Netflix’s subscriber growth over the next two years “seem conservative,” Kraft said. To top off Deutsche’s upgrade, the firm thinks Netflix has a “risk/reward profile [that] is attractive.”