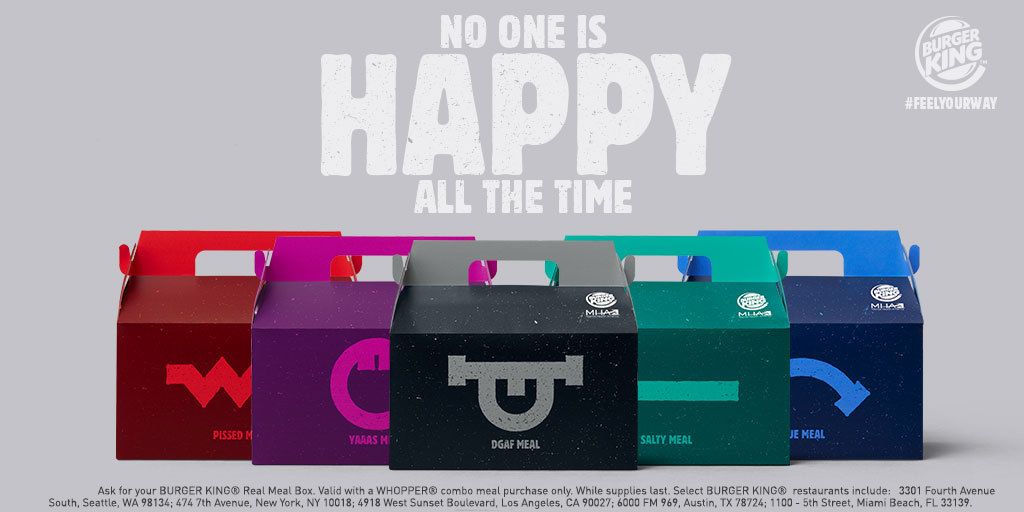 Burger King is running a limited edition range of ‘moody’ meals for Mental Health Awareness Month, in May 2019

Burger King this week launched a new mental health awareness campaign complete with mood-themed “Real Meals.” While some have applauded the campaign for helping raise awareness around mental illness, others have criticized it for seeming to make light of mental health issues.

Timed to Mental Health Awareness Month in May, Burger King’s “Real Meals” include the Blue Meal, Salty Meal, Yaaas Meal and DGAF (Don’t Give a F—) Meal, and are available only in select restaurants in a few cities. The campaign also includes an video spot on YouTube showing a montage of people in various emotional states, using the line: “No one is happy all the time. And that’s OK.” The company said it partnered with Mental Health America for the campaign.

The campaign quickly drew criticism from some on social media, who claimed it was downplaying mental illness or attempting to profit off the subject. Others wondered whether Burger King was making resources available for people with mental health issues or making monetary contributions to any organizations. “Mental disorders are not just moods like ‘pissed’ and ‘DGAF,'” Tweeted. “They cause terrible suffering and hundreds of suicides every day. This new campaign of yours is extremely distasteful.”

The campaign, done with ad agency MullenLowe, hits on a topic of wide interest and importance in today’s culture. But experts say businesses seeking to use a topic like mental health in their marketing need to show it’s a genuine, ongoing priority and not just a one-off.

Meanwhile, some mental health groups say elevating the conversation around mental health, even if it is through a marketing stunt, can be a good thing.

Kevin Wong, head of communications at the Trevor Project, said if Burger King restaurants are elevating the conversation about mental health and increasing discussions around topics like depression and mental health, that may be helpful in shedding light on those topics and destigmatizing them. The organization provides crisis intervention and suicide prevention services to LGBTQ youth.

“If it takes Burger King doing that in their communities, that’s a win,” he said. Wong added he doesn’t believe marketing has to be serious or boring. “It can be fun and relatable when it makes sense from an impact perspective.”

Tiffany Huth, director of communications at the Association for Behavioral Health and Wellness, agreed this kind of messaging is a way to reach this demographic in a way that’s relatable and get the conversation started around these topics.

Asked to respond to the negative feedback on social media, a spokeswoman for Burger King said the company wasn’t offering interviews for the campaign and said the chain is donating an undisclosed amount to Mental Health America. MullenLowe referred comment to Burger King.

Marketing experts say companies seeking to discuss a topic like mental health in their marketing need to show consumers it’s a true priority or risk it seeming shallow.

“If you’re in a business where you don’t have many major innovations, you really want to stay on top of people’s minds. Any activity like this can help to achieve that goal,” said Alexander Chernev, a marketing professor at the Kellogg School of Management at Northwestern University. But people like to see a continued effort. “If the issue is important to the company, you’ll see that company staying with this issue.”

He noted that his research has shown people perceive a company’s products as performing better when they know a company has behaved ethically. “It’s a halo effect.”

But attempts at social responsibility can occasionally backfire. Chernev notes KFC’s “Buckets for the Cure” initiative nearly a decade ago, which pledged to donate 50 cents from each branded pink bucket of certain chicken to the Susan G. Komen organization. Some spoke out against the campaign for mixed messaging given health concerns as it pertained to KFC’s food.

Burger King should seek to take further steps to support this cause if it’s truly a priority, said Ari Lightman, a professor of digital media and marketing at Carnegie Mellon’s Heinz College of Information Systems and Public Policy. He said if they don’t follow up and take additional actions to stand by the cause, their interest could be viewed as shallow.

“If the general public finds out that your actions don’t coincide with your messaging, then that can be potentially very damaging for a company,” he said.