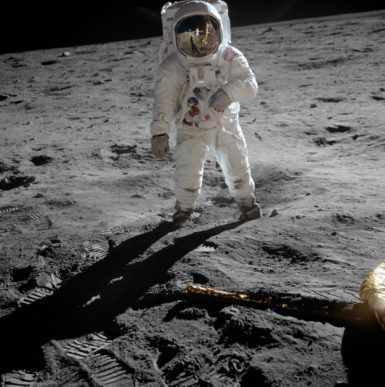 Aldrin atop the Moon during Apollo 11.

It’s brother versus brother in a battle over proceeds from the sale of a Andy Warhol Moonwalk screenprint. On Wednesday, Keith Donaldson filed suit against his brother Robert in Hennepin County District Court in Minnesota over what the lawsuit alleges was an “unauthorized” sale of Keith’s Warhol.

According to civil court papers, the brothers had acquired the Warhol work—two prints published in an edition of 160—in 1999, and Robert held both pieces in his possession. In 2018, Keith asked for the return of what he believed was his half—only to learn Robert had sold both parts two years prior for $200,000, ultimately netting $180,000 after a commission.

Moonwalk—merged stills featuring Buzz Aldrin and the American flag—was executed by Warhol in 1987, only months before his death. They were the only prints ever completed for TV, Warhol’s planned portfolio of monumental moments in American television history. At Sotheby’s in April, a set that was estimated at $250,000 to $350,000 sold for $312,500.

According to the lawsuit, Keith is requesting either the return of the print or at least $140,000, which he claims is the fair market value of one half of the work.

Attorneys representing Keith and Richard Donaldson did not immediately return requests for comment. A court date is not yet set.

As Storm Nears, Museums Brace for Impact -ARTnews
After Star Turn at Obama White House and Ahead of Touring Retrospective, Alma Thomas Comes to Mnuchin in New York -ARTnews
To Top
error: Content is protected !!