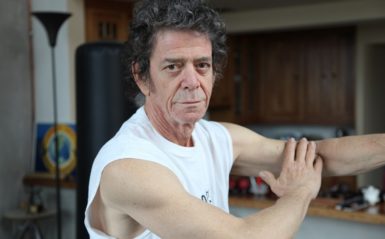 This August, the Brooklyn Public Library will host the first edition of a new annual event: International Lou Reed Tai Chi Day, which is presented in collaboration with the late musician’s widow, artist Laurie Anderson. The library will exhibit Reed’s personal collection of tai chi literature, weapons, and other paraphernalia, in a show of objects hand-selected by Anderson beginning July 29. A tai chi demonstration led by Reed and Anderson’s teacher, Master Ren Guang Yi, will be held in Brooklyn at the Prospect Park Bandshell on August 3.

Reed was a vocal proponent of the ancient Chinese martial art, which he practiced for more than three decades. For 12 of those years, he studied with Master Yi, whose demonstration will be open to students at any level of experience. Yi’s demonstration will focus on the Chen-family style, the oldest of the five forms of tai chi, and will be set against an immersive sonic work featuring Reed’s guitar feedback titled DRONES. A screening of the Ang Lee film Crouching Tiger, Hidden Dragon (2000), which puts martial arts choreography front and center, will follow the event.

The day will also include several other demonstrations, talks, and meditations at the library. Simultaneous celebrations are planned for Berlin, San Francisco, and Washington D.C.

If you can’t make it to the Brooklyn event or the celebrations in other cities, you can, at least, enjoy some full-color footage from a Velvet Underground performance from 1969 at a war protest that has just been released. It features Reed performing “I’m Waiting for the Man”, “Beginning to See the Light”, and “I’m Set Free.”