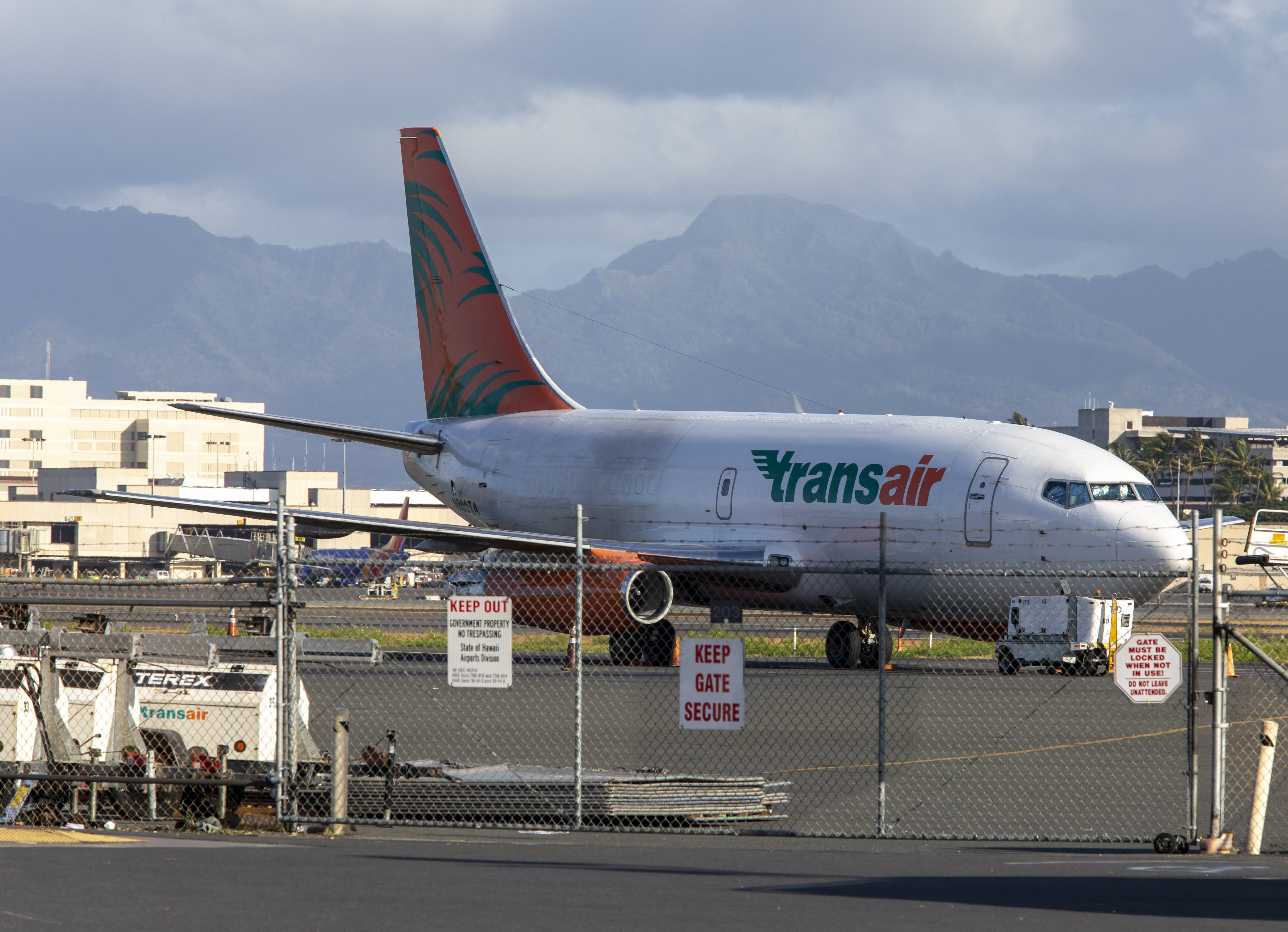 A Transair Beoing 737 Cargo Jet sits on the tarmac at the Transair Cargo Facility at the Dainel K. Inouye Internaional Airport on July 2, 2021 in Honolulu, Hawaii.Eugene Tanner | AFP | Getty ImagesA Boeing 737-200 cargo plane made an emergency landing in the ocean near Honolulu early Friday after pilots reported engine trouble, the Federal Aviation Administration said.Both pilots were rescued from a debris field, the U.S. Coast Guard said.The FAA said Transair Flight 810 made the emergency landing at around 1:30 a.m. local time on Friday.”The pilots had reported engine trouble and were attempting to return to Honolulu when they were forced to land the aircraft in the water,” the FAA said. “The FAA and National Transportation Safety Board will investigate.”The Boeing plane was built in 1975 and powered by two Pratt & Whitney engines, according to the FAA. The aircraft was not a 737 Max, the jet that officials had grounded for 20 months through last November after two fatal crashes.The plane took off from Honolulu’s Daniel K. Inouye International Airport bound for Kahului Airport on Maui, the U.S. Coast Guard said.”Our situation: We lost number 1 engine and we’re coming straight to the airport,” one of the pilots told an air traffic controller, according to audio from the airport’s tower posted on website LiveATC.net. The pilot said the plane had about two hours worth of fuel. “We’re going to need the fire department.””There’s a chance we’re going to lose the other engine,” the pilot said. “It’s running very hot.”The air traffic controller moments later said: “Low altitude alert. Low altitude alert. Are you able to climb at all?””No. Negative,” another pilot said.The first pilot asked the air traffic controller to “let the Coast Guard know.”The Coast Guard said it responded to a report of a downed plane south of the island of Oahu at around 1:40 a.m. and that both people on board were rescued, with help from the Honolulu Fire Department.It said a rescue helicopter located the white-and-orange Transair plane in a debris field at around 2:30 a.m.One survivor who was seen on the tail of the aircraft was carried out of the water by the rescue helicopter and airlifted to a Honolulu hospital, according to a Coast Guard report. The other person was on top of floating packages and transported to shore by a Honolulu Fire Department rescue boat, it said.Transair, a Hawaiian cargo carrier, which specializes in flying freight between the islands, didn’t return requests for comment. The airline has been operating since 1982, according to its website.”We are aware of the reports out of Honolulu, Hawaii and are closely monitoring the situation,” Boeing said. “We are in contact with the U.S. National Transportation Safety Board and are working to gather more information.”The NTSB said it is sending 10 investigators to the crash site.Cargo jets are often decades old, converted to carry freight after years of being used to transport passengers.Boeing shares recovered some of the losses that occurred after the news of the crash, but ended down 1.3% at $236.68.