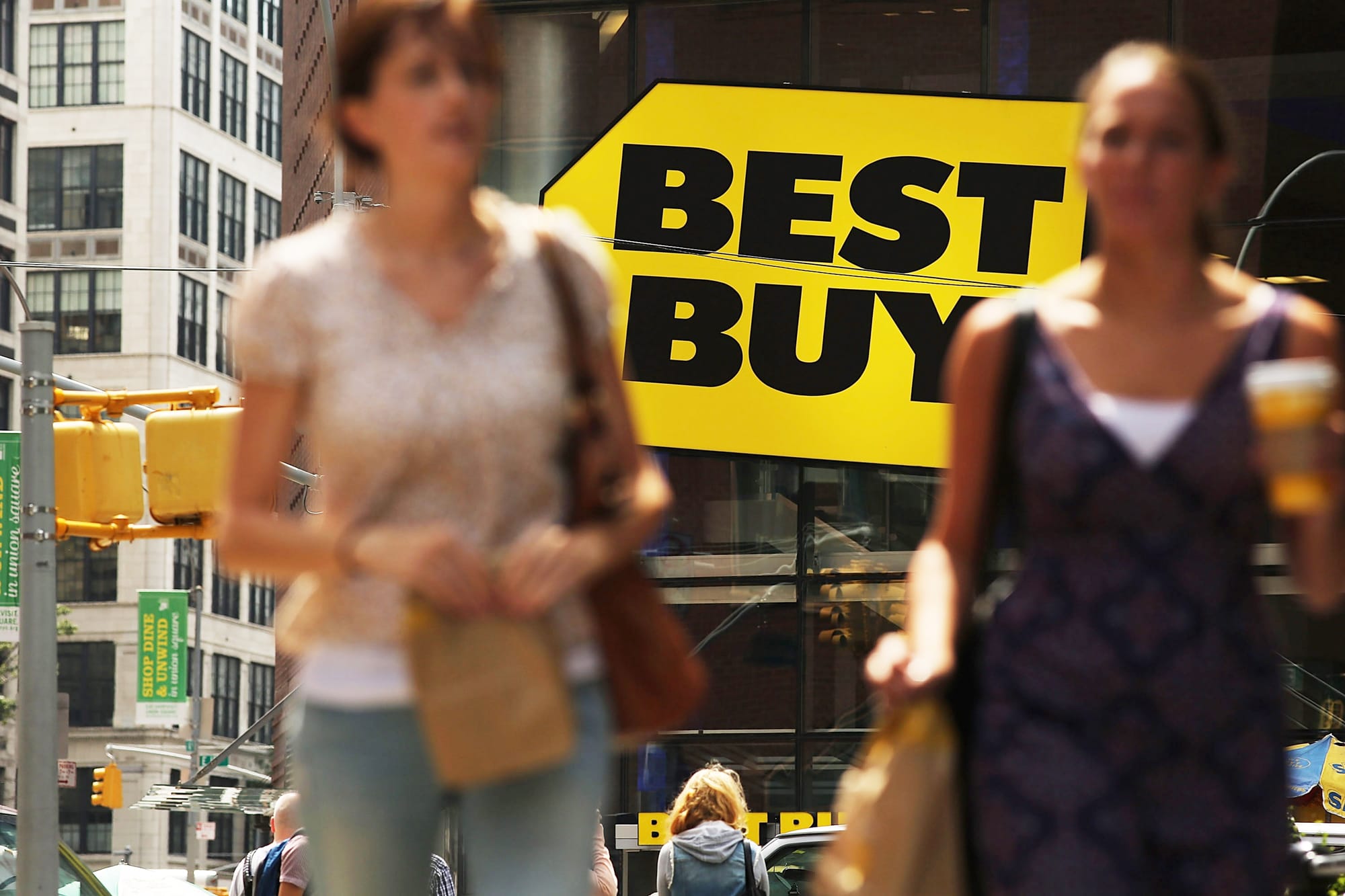 The company did report earnings that beat expectations by 9 cents and raised its earnings forecast for the fiscal year, but investors were pessimistic, focusing on the sales miss and a narrower estimate for same-store sales, driven by disappointing sales in Canada.

Best Buy CEO Corie Barry said several core products, including televisions, smart watches and headphones, will be hit with The Trump administration’s 15% tariff on Sept. 1. The announcement of a delay in tariffs on Chinese goods on some items will affect computing, mobile phones and gaming consoles, which will see the 15% duty on Dec. 15.

But the company still said that although it has tried to factor the impact of tariffs into its guidance, uncertainty is looming.

“There is a bit of art and a bit of science to estimating this and we don’t exactly have a precedent for the quantity of moving pieces that we have in place right now,” Corie said in a call with analysts. “There’s a few things we are trying to take into account here,” including exactly which goods are on the list, when they will be implemented, and what rates.

Here’s how the company did, compared with what Wall Street was expecting, according to Refinitiv consensus estimates:

“For the second quarter, we are reporting comparable sales growth of 1.6% on top of a very strong 6.2% last year,” said Barry. “We also delivered improved profitability driven by gross profit rate expansion and continued disciplined expense management, demonstrating the culture we have built around driving cost reductions and efficiencies to help fund investments.”

Sales at Best Buy stores open for at least 12 months grew 1.6%, lower than analyst expectations of a 2.1% increase.

Best Buy raised its earnings forecast for the fiscal year to a range of $5.60 to $5.75 per share from a previous estimate of $5.45 to $5.60 per share. Both numbers are after excluding one-time items.

However, sales at stores open at least a year are expected to rise 0.7% to 1.7% this year. Previously, it estimated 0.5% to 2.5% same-store sales growth. Analysts were anticipating a 2% increase.

Internationally, same-store sales fell 1.9%, while revenue dropped 3.4% to $715 million. The company said the decline was driven primarily by sales in Canada.

Best Buy said it repurchased $230 million in stock during the quarter. Prior to Thursday’s sell-off, Best Buy shares were up 30% since the start of the year, bringing its market cap to about $18.4 billion.

“I think that the challenges with Best Buy are many of the same challenges that are overall facing the retail industry. There are certainly the issues related to tariffs, but you can’t overlook all of the other challenges the company has as well,” Sucharita Kodali, an analyst at Forrester, said on CNBC’s “Squawk Box. “

She said one of the pressures the company is facing is commodification of its core products, including electronics.

“When you see the strength in numbers from retailers like Walmart and Target, their consumer electronic sections are bolstering that and that is absolutely going to naturally adversely affect Best Buy. You have the continued growth of Amazon, where electronics are a significant part of what consumers buy on that site. “

The company also said its same-store sales growth was fueled by strength in appliances and headphones, while gaming and home theater sales declined.

“What Best Buy has leaned into and what their strength was in this quarter was in categories like appliances, which are not well-suited to the e-commerce landscape, you have services, you have accessories which are high-margin things like headphones so those are definitely things that have helped and supported Best Buy,” said Kodali.

“But the question is how much more can they lean into things like services and installations, and is there more headroom there? I would argue that those are sectors that can be somewhat challenged,” she said.

Airlines hurt by 737 Max grounding are scrambling to find replacements