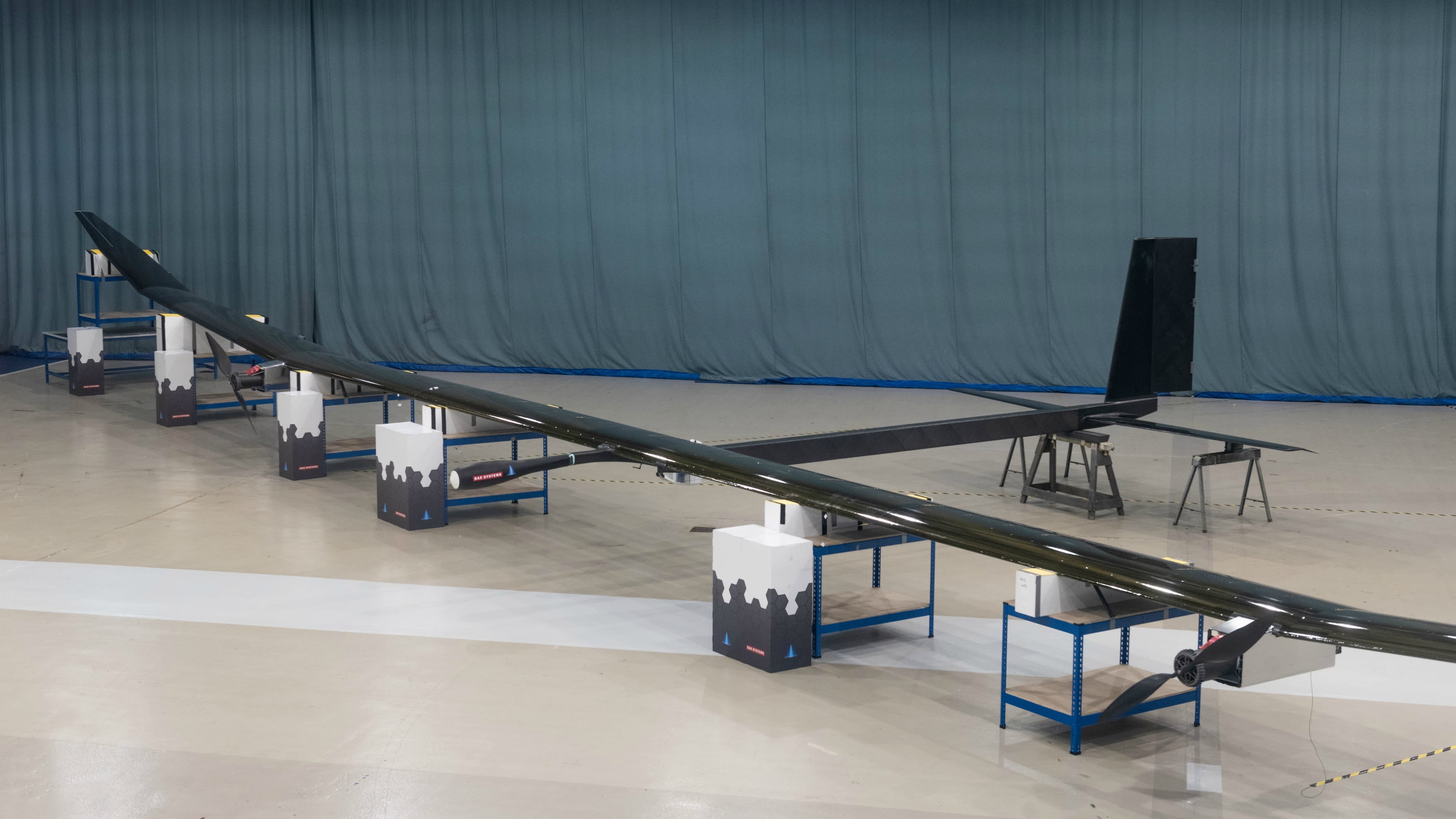 BAE Systems has reached an agreement to acquire British company Prismatic, with the defense and aerospace giant looking to continue its development of solar-powered unmanned aerial vehicles (UAVs).The deal, announced Tuesday, builds on a collaboration between BAE Systems and Prismatic announced last year. Their work has resulted in the production of two prototypes of the PHASA-35 UAV. BAE Systems did not provide financial details of the acquisition in its announcement. The PHASA-35, which stands for Persistent High-Altitude Solar Aircraft, has a wing-span of 35 meters and weighs 150 kilograms, including a 15 kilogram payload. The aircraft is powered by the sun during the day while a battery system keeps it airborne at night.The combination of a long-life battery and efficient solar technology means that the PHASA-35 can potentially fly at 65,000 feet for as long as a year, BAE Systems claim. Applications for the aircraft could include the delivery of 5G networks, border protection, disaster relief and surveillance.”Working together with Prismatic, we’re pushing technological boundaries to develop a revolutionary solar powered aircraft at an incredibly rapid pace,” Nigel Whitehead, BAE Systems’ chief technology officer, said in a statement. “Our investment in the company will enable us to take this technology into production, with the very real possibility that this aircraft could enter initial operations with customers within 12 months of flight trials,” Whitehead added.The last few years have seen several innovative aircraft take to the skies. In August 2018, a solar-powered aircraft from Airbus completed a maiden flight lasting 25 days, 23 hours, and 57 minutes.In 2016, the Solar Impulse 2, a manned aircraft powered by the sun, completed a circumnavigation of the globe without using fuel. The trip was completed in 17 separate legs.How much potential is there, then, when it comes to using solar technology to power aircraft?”Solar power provides much less power than conventional engines running on jet fuel,” Marc Stettler, a lecturer in transport and the environment at Imperial College London’s Centre for Transport Studies, told CNBC Wednesday via email. “This means that solar-powered aircraft have to be much lighter and fly at slower speeds,” Stettler, who is also the director of Imperial’s Transport & Environment Laboratory, added. This was why solar aircraft were either unmanned or, like the Solar Impulse 2, able to carry just one person, he said. Stettler added that solar made a lot of sense for unmanned applications such as Earth observations and telecommunications. Flight length would be limited by the lifetime of batteries which store the sun’s energy in order to power the aircraft at night, he explained. “There are no emissions from the aircraft while in flight, so solar-powered aircraft have a minimal impact on the environment,” Stettler went on to state. “However, they’re unlikely to be used for passenger flight anytime soon.”On Wednesday, during a separate discussion on CNBC’s “Squawk Box Europe” about the future of energy, the president and CEO of the DNV GL Group sought to highlight the benefits of electrification.”Electrical vehicles … are more than three times more efficient than their combustion counterparts, some would say as much as four times as efficient,” Remi Eriksen said. “A LED bulb is 50 times more efficient than a kerosene lamp, so you have efficiency gains, huge efficiency gains, by going electric,” he added.