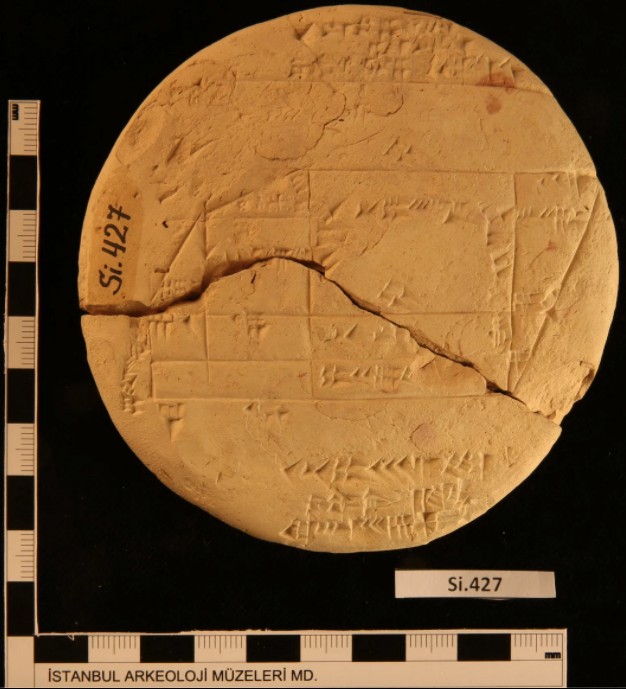 An Australian mathematician has discovered that Babylonians may have used applied geometry roughly 1,500 years before the Greeks supposedly invented its foundations, according to a new study published in the Foundations of Science journal this month.
In 2018, Daniel F. Mansfield, a researcher at the University of New South Wales in Sydney, Australia, interpreted the mysterious numbers that were inscribed onto an ancient fragmented clay tablet called Plimpton 322. The tablet, which was made in ancient Mesopotamia (now Iraq) between 1822–1762 B.C.E., has long been an object of fascination. In 1945, researchers had concluded that the tablet held some trigonometry, but was vastly different from the established study of trigonometry taught in schools today.

Greek trigonometry is based on a right-angled triangle whose exact shape is ascertained by solving for its two other angles in a field of 360 degrees, i.e. in a circle. This kind of applied geometry, which brings circles and right angles together, was very complicated and required approximations, but necessary for making astrological calculations. Mansfield realized that the Babylonian kind of applied geometry was a simpler study of rectangles.
If angles in trigonometry can be seen as two hands of a clock creating different angles as they divide a circle, the chart of numbers on Plimpton 322 describes angles that are created when lines bisect a square. Calculating angles in this manner allows for exact ratios, instead of the irrational numbers and approximations of Greek geometry. Mansfield had a hunch that these mathematics may have been developed alongside the rise of private property and the need to mark boundaries and borders. He searched for evidence to prove his hypothesis and he eventually found it.

The Greek (left) and Babylonian (right) conceptualization of a right triangle. Notably the Babylonians did not use angles to describe a triangle.
Courtesy Dr. Robert F. Mansfield

The nearly forgotten tablet Si.427, which sat untouched in the Istanbul Museum of Archaeology for nearly 100 years, held the key. Made in Iraq between 1900 to 1600 B.C.E., Si.427 describes a rectangular piece of land that was being sold. Alongside notes indicating marshland, a tower, and a threshing floor, a field plan measures the boundaries of the land with extreme precision. Using the example from tablet Si.427 and the charts inscribed on Plimpton 322, Mansfield argues that Babylonians must have developed geometry to create accurate perpendicular lines.

He further explains his theory with the support of cultural texts that clue us into ancient practices for surveying land. In his paper, Mansfield includes a portion of a text in which a senior scribe is chastising a junior scribe for making the wrong calculations,
“Go to divide a plot, and you are not able to divide the plot;go to apportion a field, and you cannot even hold the tape and rod properly.The field pegs you are unable to place; you cannot figure out its shape,so that when wronged men have a quarrel you are not able to bring peace,but you allow brother to attack brother.Among the scribes, you (alone) are unfit for the clay.”
The tape and rod refer to measuring rope and a 1-rod reed, which were a surveyor’s main tools. These tools, as well as the work carried out by scribes, were seen as symbols of fairness. If the calculations were not done right, this could make people feel cheated and bring about violence.
The text fits Mansfield’s interpretation of the math quite neatly. Even though one ratio the tablet has left him stumped, the discovery opens up new potential approaches to the theory and history of applied geometry.