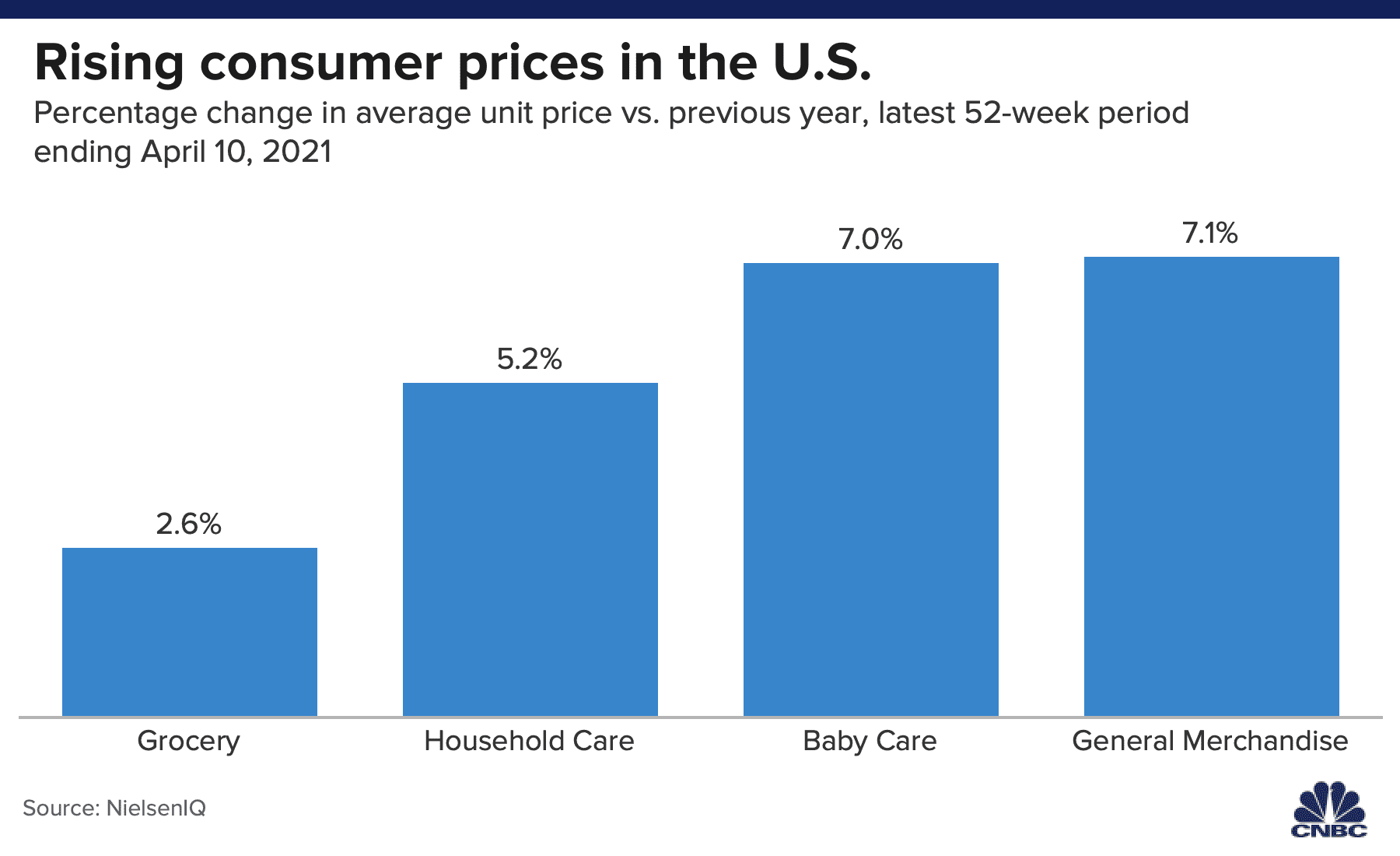 Shoppers search for items at a Costco Wholesale store August 4, 2020 in Colchester, Vermont.Robert Nickelsberg | Getty ImagesInflation is coming.Look no further than Coca-Cola and Procter & Gamble sharing plans this week to raise prices to offset rising commodity costs. The costs of raw materials, ranging from lumber to resin, are surging, so companies are taking steps to protect profits.The price increases follow a year of surging demand for a host of items from paper towels to jars of peanut butter. Sales of consumer packaged goods rose 9.4% to $1.53 trillion last year, according to the Consumer Brands Association. Many manufacturers pulled back on advertising and promotions as they tried to keep up with demand, gaining market share without much marketing.ING Chief International Economist James Knightley is forecasting consumer prices will continue to rise in the near term and could gain almost 4% by May, compared with the same time a year ago. The consumer price index, which tracks how much U.S. consumers pay for a basket of goods, rose 2.6% in March from the year-ago period, according to the Department of Labor.Inventories are ‘too low’Low inventory is helping companies flex their pricing power, he said.”According to the Institute for Supply Management, their latest survey showed a net 40% of manufacturers are reporting that their customer inventories are ‘too low,'” Knightley said. “This offers more evidence that corporate pricing power is strengthening.” Food industry analyst Phil Lempert said numerous factors have increased costs for farmers that pick produce, factories that make consumer packaged goods and meatpacking plants that process beef, pork and chicken. Ports are congested, truck drivers are in short supply and food workers must try to socially distance. That’s made it harder to keep up with demand and get items, from grains to Italian cheeses, shipped across the globe.Price hikes get stealthy Moody’s analyst Linda Montag said that she doesn’t view higher prices as a competitive advantage because all consumer companies are facing higher commodity costs. Besides Coke and P&G, PepsiCo, Kimberly-Clark, General Mills and J.M. Smucker have addressed raising prices. And consumers might not even notice that they’re paying more for diapers or soda.”Consumer companies across the board have gotten very savvy about how to implement price increases without just slapping on five to 10% price increases,” Montag said in an interview.Some of those methods include using new packaging, selling smaller-size packs for the same price or offering promotions that bring the price down until consumers are used to the higher sticker price. Hedging positions may also give some manufacturers, like Coke and Pepsi, more flexibility to raise their prices gradually because they won’t feel the impact of higher commodity costs for several quarters.More cash in consumer pockets means less risk Hiking prices always carries a risk that demand for those products will fall. However, Moody’s analyst Chedly Louis said that she isn’t expecting consumers to trade down to private label products because consumers put their trust in bigger brands during the crisis. That behavior is expected to stick around longer.”There’s a potential for the consumer to trade down within P&G’s product portfolio to cheaper, lower margin products. It’s still P&G, but it’s cheaper,” Louis said.Many consumers also have more cash in their wallets from government stimulus checks and foregoing travel, sports games and fine dining for year.Not all companies have the same flexibility to raise prices. Piper Sandler downgraded Kraft Heinz stock on Friday, citing the company’s relatively weak pricing power as one reason for the decision. Analyst Michael Lavery wrote that the company’s pricing power lags behind that of peers like General Mills, Mondelez and Hershey, so hiking prices could hurt demand.Discounts are rareMost retailers will pass on the higher prices to consumers. Lempert said that grocers are juggling pricier services, like online grocery delivery or curbside pickup, leaving little room in profit margins to absorb higher food costs.The cost of groceries had already been rising as retailers offered fewer discounts while shoppers cleared shelves last spring and bought more cooking supplies than usual in the months that followed. Phil Tedesco, vice president of retail intelligent analytics for NielsenIQ, said in a typical month, 31.5% of units are sold on promotion. In March, only 28.6% of units were sold on promotion.”This has led to shoppers having fewer opportunities to take advantage of sales in the store, and as a result, the total cost of grocery products has increased slightly,” he said.J.P. Morgan analyst Ken Goldman wrote in a note to clients on Monday that higher prices will help food retailers, particularly as they face tough comparisons to last year’s skyrocketing demand.”Too much inflation is bad for grocers, but an incremental 2-3% (roughly the percentage the producers need to pass through), with a mix shift toward higher-priced products, is probably very helpful right now,” he said.—CNBC’s Melissa Repko contributed to this report.

U.S. lifts pause on use of Johnson & Johnson Covid vaccine, clearing way for states to use doses
College students are getting valuable career experience working as brand ambassadors for companies like TikTok and Bumble
To Top
error: Content is protected !!