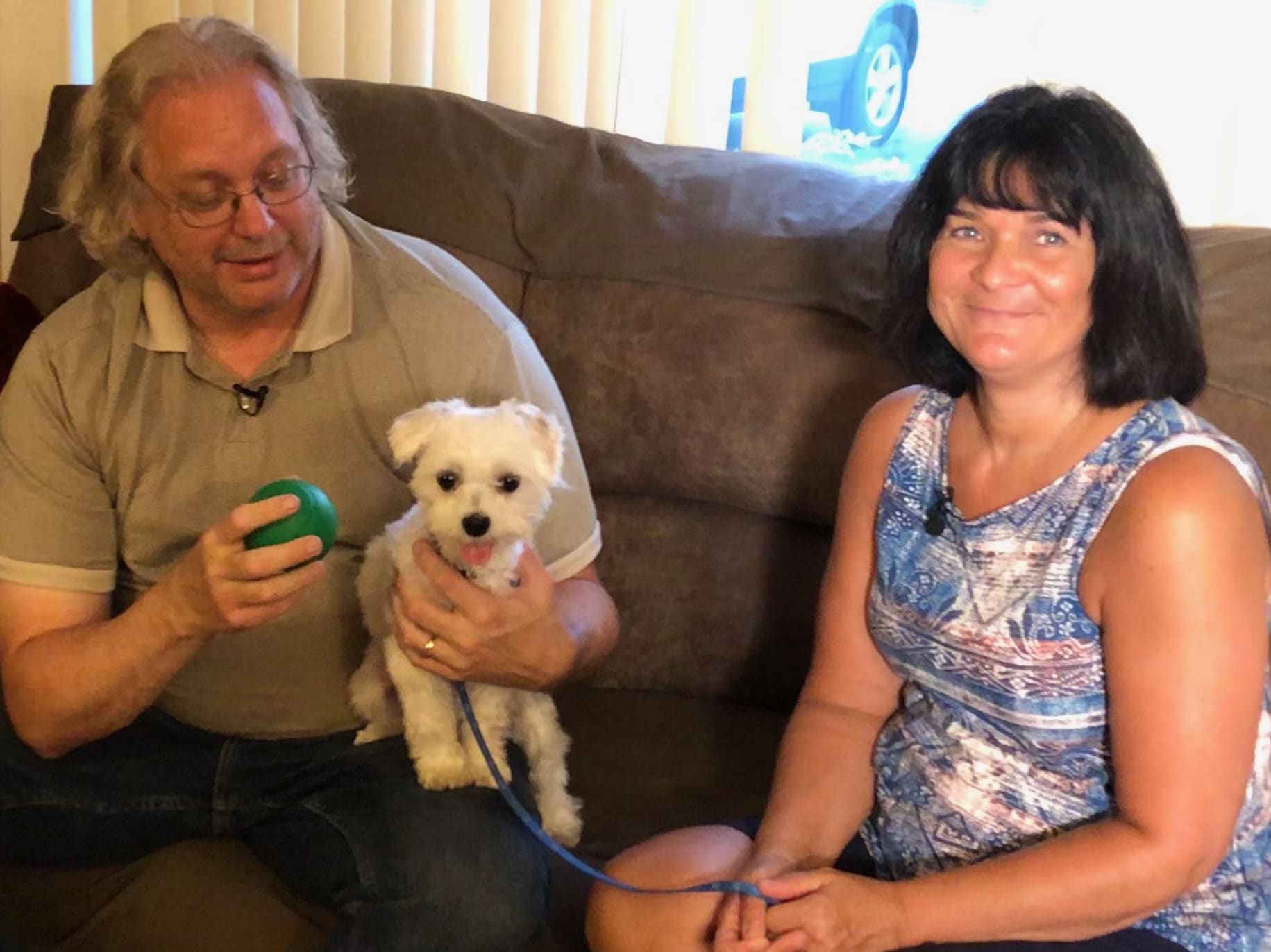 The Smiths are a dog family. The dog bone bumper sticker on their car confirms it.After their Bichon Frise passed away, Patty and Scott Smith searched for a new furry addition to the family. Due to Patty’s allergies, the couple was looking for a hypoallergenic dog. After what she described as a difficult experience finding the right dog at animal shelters and working with a breeder, she found a pet store, Breeders Club of America in Middletown, New Jersey. There the couple met Chase, a Maltese puppy.”Scott fell in love with him as soon as they took him out of the cage and put him in his lap,” Patty said in an interview at her home in Little Falls, New Jersey. The couple negotiated a price and handed over their debit card and prepared to take Chase home, except they were told their card didn’t work.”They said, ‘well, why don’t you just finance the dog?'” Scott said.The Smiths agreed and signed the contract electronically, planning to pay off the balance right away but when the bill came, their puppy love quickly turned to buyer’s remorse.The financing was a pet lease — meaning Chase didn’t belong to them until he was paid off in full.”I just couldn’t believe that there was such a thing as leasing,” Patty said. Patty Smith and her husband Scott of Little Falls, New Jersey, and Chase, a Maltese puppy.Jodi Gralnick | CNBCAccording to the American Pet Products Association, last year Americans spent more than $2 billion purchasing pets. It is unclear what portion of that is from pet leasing, but several states have worked to ban the arrangement. In August, New Jersey joined California, Indiana, Nevada, New York and Washington in outlawing pet leasing.The problem critics have with pet leasing is that consumers are often taken off guard by the terms of the arrangement and can wind up paying much more than they anticipated for the pet. According to the ASPCA, pet leases tend to be 18 months to 3 years long and require an additional final payment to keep the animal. In the Smiths’ case, it cost an additional $505.”A dog that costs $2,000 could end up costing a consumer $7,000,” said Jennie Lintz, the director of the ASPCA Puppy Mill Campaign.If a consumer doesn’t make his or her payments, the financing company can repossess the animal just like a car. Although Lintz acknowledged she doesn’t know of any cases where an animal has been repossessed.”We don’t think that the lending companies in reality probably want to repossess your animal,” she said. “I mean, as much as your two-year-old dog means a lot to you, and is probably irreplaceable. To them, what are they going to do with this dog? So really, we think that they’re using the threat of repossession, unfortunately, to basically squeeze as much money out of the consumer as they can. And even if the dog gets very sick, the dog passes away, the consumer is on the hook for paying, making those payments.”U.S. Senator Bob Menendez, D-NJ, is urging the Federal Trade Commission to do more to protect consumers.”[Consumers] should know what that ultimate payment is, they should know the terms and conditions, there should be absolute transparency … We want the Federal Trade Commission to issue rules that ultimately make that happen,” Menendez said.Chase, a Maltese puppy.Jodi Gralnick | CNBCThe lending companies associated with the Smiths’ contract, Virginia-based My Pet Funding and California-based Monterey Financial, declined repeated requests for comment. There are also other companies that offer similar financing.Breeders Club of America also declined an interview but said it stopped offering pet leases earlier this year. The Smiths purchased Chase in June 2018.The contract that was emailed to the Smith family emphasizes the agreement is a lease, but the family says in the store they were shown on an iPad only the areas where a signature is required.After consulting with their lawyer, the Smiths decided not to pursue litigation and paid off the bill for Chase within weeks of bringing him home. Ultimately, they paid $1,200 more than they expected in store.”If we would have known,” Patty said, “we would have either, if we could have, went back and paid in cash, or just said forget it.”

Investing in China real estate, warehouses on the back of e-commerce boom
How NBC’s SNL firing could have been avoided and why it couldn’t
To Top
error: Content is protected !!