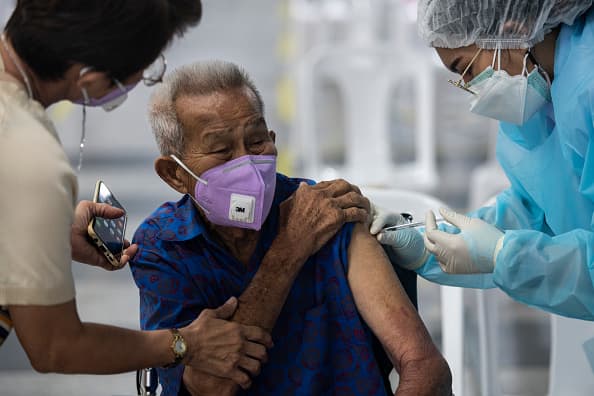 An elderly man is administered with the AstraZeneca Covid-19 vaccine at the Central Vaccination Center in Bang Sue Grand Station on July 13, 2021 in Bangkok, Thailand.Sirachai Arunrugstichai | Getty Images News | Getty ImagesBusinesses and local governments in Asia are coming up with creative ways to encourage vaccination among people still hesitant to get one — doling out everything from gold to farm animals.The Asia-Pacific region is battling a Covid resurgence as major cities in China, Malaysia, Indonesia and Australia report rising daily cases, especially from the highly contagious delta variant of the disease.But most of Asia is struggling with low inoculation rates as vaccine hesitancy persists, and vaccine disinformation spreads.On top of that, many countries can’t get enough doses for their people.The region’s vaccine progress lags Europe and North America, according to Our World in Data. As of Aug. 8, 41.6% of Europeans and 38.8% of North Americans were fully vaccinated, compared with only about 11.6% of people in Asia.Hong Kong: apartment, gold and a private flightBusinesses in Hong Kong are giving out prizes in a bid to boost the vaccination rate amid public mistrust of the government.Several sponsors including real estate developer Sino Group arranged a lucky draw for those who have been vaccinated. Top prize is a new, one-bedroom apartment worth about 10.8 million Hong Kong dollars ($1.39 million).To support a government vaccination campaign, Cathay Pacific Airways has 20 million Asia air miles up for grabs. One winner will get to hold a private party on board the airline’s new Airbus A321neo aircraft.An organization of gold trading firms — the Chinese Gold and Silver Exchange — is giving away gold worth 1.1 million Hong Kong dollars to those who have received two Covid shots. The amount of incentives provided by businesses totaled more than HK $73 ﻿million ($9.4 million), the South China Morning Post reported in June. About 35% of Hong Kong’s population has been fully vaccinated as of Aug. 8, according to Our World in Data.Philippines: land, cattle and sacks of riceBoth local governments and companies in the private sector are doing their part to encourage more people to vaccinate.The municipality of San Luis Pampanga launched a campaign giving those who are vaccinated a chance to win a cow.Congresswoman Camille Villar offered people in her city a slew of incentives if they are vaccinated. Residents from Las Pinas City stand a chance to win a house, motorcycles and even groceries if they receive at least one dose of Covid vaccine, the Manila Times reported.On the outskirts of Manila, in Sucat, 20 people stand a chance to take home a 25 kilogram (55 pounds) sack of rice every week if they get their shots, according to Reuters. The initiative aims to draw poorer residents who need the extra push to get inoculated, the news agency said.While some give out rewards, others issue threats to those who won’t vaccinate.After poor turnouts at several vaccination sites in the capital Manila in June, Philippine President Rodrigo Duterte reportedly warned residents: “If you don’t want to get vaccinated, I’ll have you arrested.”As the city prepared to enter a two-week lockdown on Friday, Reuters reported that thousands of people showed up at vaccination centers across Manila.Only 9.8% of the country’s population was fully vaccinated by Aug. 5, Our World in Data numbers showed.Indonesia: live chickensIndonesia has the second highest number of cases in Asia, according to data from Johns Hopkins University.Government authorities are giving out 500 live chickens to vaccinated seniors in Cipanas, in the West Java province, according to multiple media reports.About 85% of Indonesia’s population are Muslims. Despite religious approval by the country’s top Islamic body, many are concerned about whether the vaccines are halal, or permissible by Islam.”I was afraid that if I was vaccinated, I would die immediately … Then there was more worrying news that this vaccine contained pork,” Asep Saepudin, a 67-year-old resident of Cipanas, told Reuters.8.7% of Indonesia’s total population has been fully vaccinated as of Aug. 8, according to Our World in Data.India: gold, blenders and discountsIn India, fast food chain McDonald’s is offering vaccinated customers a 20% discount.Goldsmiths in Rajkot, Gujurat reportedly came together to encourage those above 45 years old to get vaccinated. Women were given gold nose pins for taking their vaccine shots, while men received hand blenders, the Hindustan Times said.India reported on Friday that the country had administered more than 500 million doses of vaccine.However, only 8.2% of its population has been fully vaccinated so far, Our World in Data numbers showed.The country may be facing a third wave of infections in the coming months, according to local media reports.China: eggsChina had a slow start to its vaccination program as the government was relatively successful in controlling the virus outbreak in the early days of the global pandemic. As a result, many citizens did not initially see the urgency to get vaccinated until pockets of resurgence appeared in the country.In March this year, a Beijing health center was giving away 5.5 pounds (2.5 kilograms) of eggs to residents who were 60 years and above when they received their first vaccine shot, the Associated Press reported.Some regions, however, took a harsher approach.Officials reportedly visited villages to convince them to get vaccinated, and were told it was their national duty, The Washington Post said.The country has administered almost 1.7 billion doses of vaccines as of Aug. 3, reported state media Xinhua News Agency citing the National Health Commission.— CNBC’s Joanna Tan contributed to this reporting.