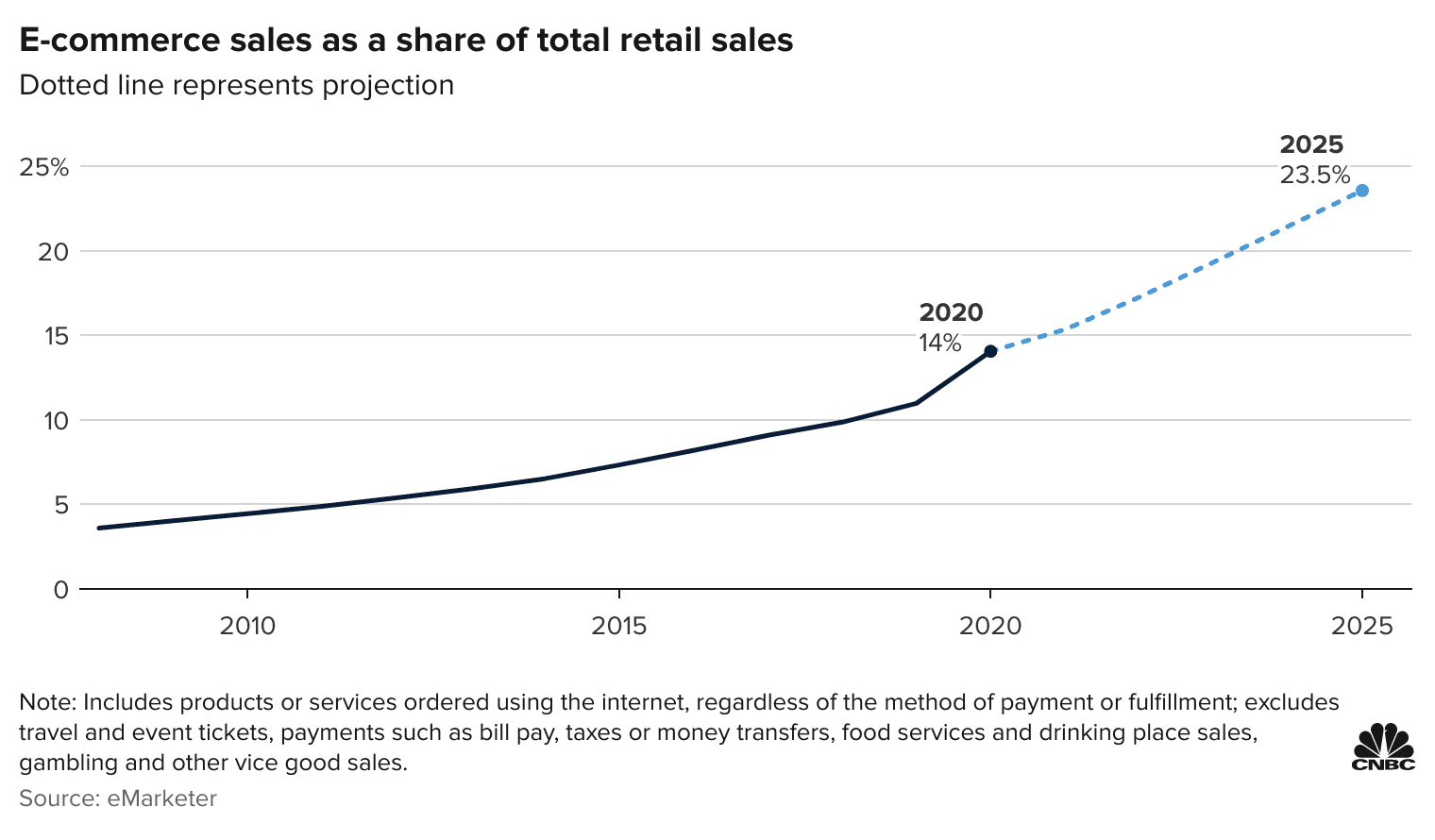 Justin Sullivan | Getty ImagesAs Amazon prepares for its annual Prime Day megasale, its reign as the biggest online retailer in the country is eye-popping: It’s projected to be raking in more than 40% of the nation’s e-commerce sales by the end of 2021.Amazon’s dominance on the internet has only grown as shopping online becomes second nature for many consumers. That’s exactly what has transpired over the past 13 years.In 2008, e-commerce sales accounted for just 3.6% of total retail sales in the United States, according to data from eMarketer. Following gradual growth year after year, that figure skyrocketed to 14% in 2020, as the Covid pandemic fueled online spending on everything from groceries and toilet paper to spin bikes and workout clothes. E-commerce sales are predicted to account for 15.3% of total retail sales by the end of this year and jump to 23.5% by 2025, eMarketer said.Zoom In IconArrows pointing outwardsFalling second to Amazon and far behind, big-box chain Walmart is predicted to take about 7% of the digital retail market this year. The two are followed by eBay, Apple, Home Depot, Target and Best Buy, according to eMarketer.Walmart and Target are holding competing deals events — as they have in past years — to coincide with Amazon Prime Day 2021. Both discounters will start sales on Sunday, but Walmart’s offers extend through Wednesday, while Target and Amazon end on Tuesday. Both Walmart and Target hope to reach customers who are already browsing the web on Prime Day for summer discounts.Zoom In IconArrows pointing outwardsAccording to a recent research report from JPMorgan, Amazon is on track to overtake Walmart as the largest U.S. retailer in 2022, as it gains a greater and greater share of the total e-commerce market. Consumers’ accelerated adoption of internet shopping during the Covid pandemic has also provided a lift to other areas of Amazon’s business, too, JPMorgan said.EMarketer is forecasting that total digital sales in the U.S. on Prime Day will jump 17.3% year over year to $12.18 billion. Sales made exclusively on Amazon on Prime Day will grow 18.3% from 2020 levels, to $7.31 billion, it said.Amazon Prime Day 2021 coverageRead more about Amazon and other have planned for this year’s sales events: Last year, Amazon’s typical July timing for its shopping extravaganza was postponed all the way into October because of the pandemic. Prime Day ended up marking the unofficial kick-off to the holiday shopping season.Back on a more normal schedule, this year’s event has been moved up slightly into June. Experts say the company is looking to boost spending in what is normally a slower time in the retail calendar. The new timing could also prompt an earlier kickoff to back-to-school shopping.”Amazon will be coy, when they announce … and so they have the benefit of knowing what they’re doing to make sure that they’re in a good position,” Rod Sides, a vice chairman of retail and distribution at Deloitte, said in an interview. “Whereas the others are responding.”—CNBC’s Nate Rattner contributed to this report.