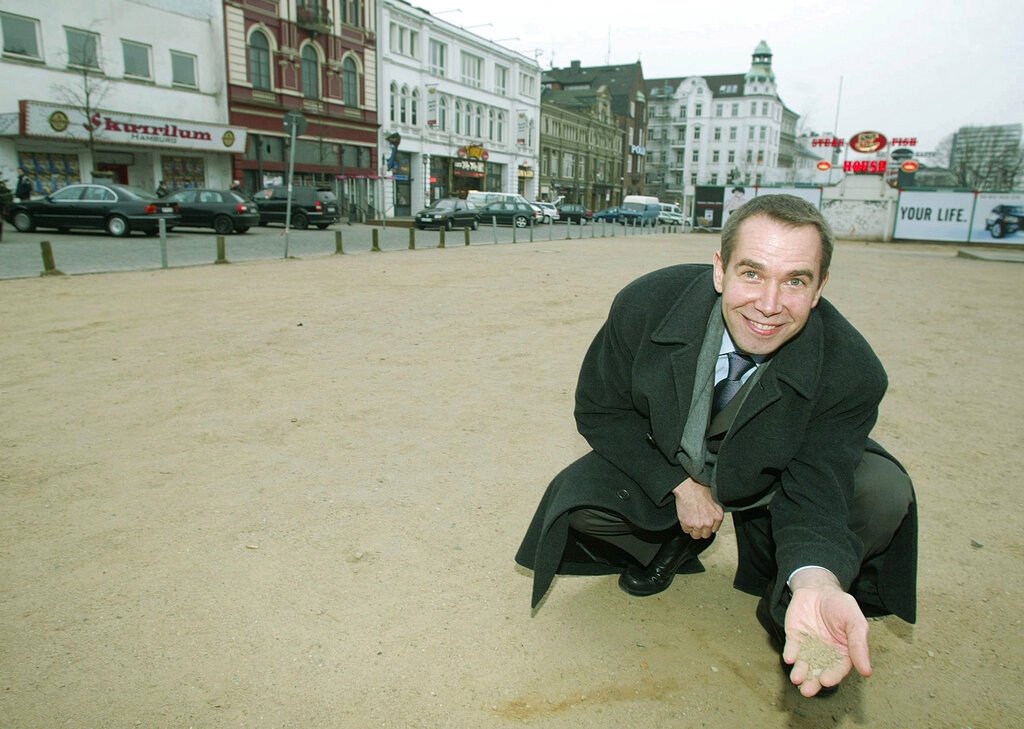 To receive Morning Links in your inbox every weekday, sign up for our Breakfast with ARTnews newsletter.
The Headlines
NEW ZEALAND’S BILLY APPLE, A POP ART PIONEER, died this morning at 85. Born Barrie Bates in Auckland, Apple adopted his memorable surname after graduating from the Royal College of Art in London in 1962. Shortly after, he decamped to New York, where Pop was rising. His irreverent works toyed with marketing and commerce, and often featured depictions of apples, his name, and himself. “I was drawn to smart advertising because they somehow had a way of talking to people in a way that you would never forget,” he told RNZ in 2009. In 1969, he created an early alternative space, APPLE, in Manhattan, and late in life he trademarked his name and developed products like Billy Apple Cider and a type of apple called, naturally, the Billy Apple. In Stuff’s obituary, the New Zealand AIDS Foundation‘s chief praised the artist for his support. In the Guardian, the curator and critic Robert Leonard revealed that the artist once said he wanted these words on his gravestone: “Apple Crumble.”

THE BANKSY BLOTTER IS BULGING. News broke Friday that the street artist’s Love Is in the Bin (2018)—the piece that partially shredded itself after selling for about $1.37 million at Sotheby’s London in 2018—will be offered again at the same venue in October. This time, it carries an estimate of $5.54 million to $8.32 million. There’s also news on the recent apparent hack of Banksy’s website, which resulted in someone paying $336,000 in crypto for an ersatz Banksy NFT. A security expert says he learned of the website’s vulnerability and attempted to notify the artist’s team. “They didn’t respond over email, so I tried a few other ways to contact them including their Instagram, but never received a response,” Curry told BBC News . (Mercifully, the scammer returned most of the money.) And just days after an unauthorized Banksy show opened in Seoul, another unauthorized affair—”Banksy: Genius or Vandal?”—has opened in New York, Artnet News reports. Banksy condemned the show, which sports art and immersive experiences, when it ran in Moscow in 2018, writing on Instagram, “What’s the opposite of LOL?”

The Digest
Jeff Koons has designed a special BMW, and its finish reportedly “combines 11 different hues into a multilayered paint that takes 285 hours to apply to each car.” Koons previously collaborated with the carmaker on its 2010 Art Car, which competed in the 24-hour Le Mans race in France. His latest creation will go on view at Frieze Los Angeles in February and be available in limited numbers. [Designboom]
The Burrell Collection in Glasgow, Scotland, which houses everything from Chinese antiquities to medieval European stained glass, will reopen in March after a £68 million ($94.3 million) renovation that began in 2016. It had been slated to go back on view last year; the pandemic nixed that. [BBC News]
Journalist Gian M. Volpicelli spoke with some of the NFT world’s biggest collectors, like Pablo Rodriguez-Fraile, the founder of the Museum of Crypto Art (MOCA!) who is installing “15 or 16” screens in his new home to show his holdings, and Jamie Burke, who started out investing in visually appealing works but soon learned that returns were better when he bought buzzed-about internet imagery. “I moved from aesthetics to memetics,” he said. [Wired U.K.]
As prices soar for vintage video game, Pokémon cards, and the like, some longtime fans are being pushed out of the market. “There’s now a whole subculture who are using Pokémon as a stock market,” said one veteran. “I don’t know how those people can look at the community and say this is healthy.” [The Associated Press]
Wes Anderson’s latest film, The French Dispatch, includes Adrien Brody playing a character inspired by the legendary art dealer Joseph Duveen and Tilda Swinton in a role informed by the beloved late art lecturer Rosamond Bernier. Collector Dominique de Menil informed still another part. [The New Yorker]
English food giant Nigella Lawson has given her endorsement to Tate Britain’s Paula Rego retrospective. It is “just breathtaking,” she writes. “I’m not out and about much, but I had to go.” [@Nigella_Lawson/Twitter]
The Kicker
SOME PEOPLE KNOW HOW TO DRIVE A HARD BARGAIN. In an interview with Vanity Fair, Julian Schnabel offers a powerful lesson for artists: Know your worth. As Schnabel narrates it, some years ago, “Larry Gagosian called me and asked me if I wanted to sell this particular painting and I said no. And he said, ‘Would you sell it for this number?’ And I said no.” This went on a few more times, until “he said, ‘Will you sell it for this?’ And I said, OK.” Gagosian was buying on behalf of collector Peter Brant, who will open a Schnabel show at the Brant Foundation Art Study Center in Manhattan’s East Village later this week. [Vanity Fair]