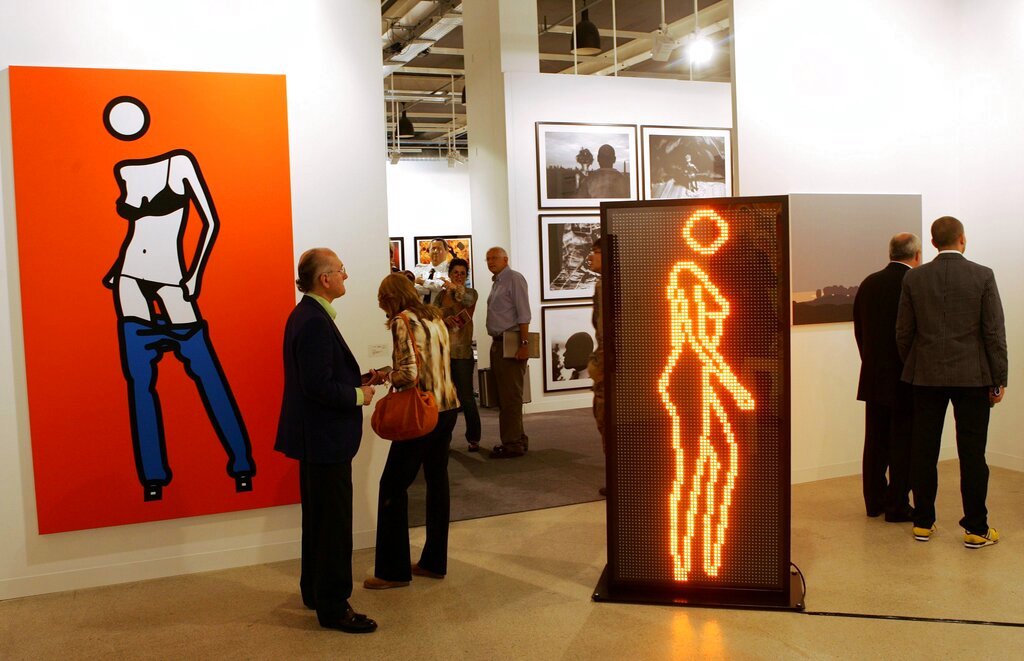 To receive Morning Links in your inbox every weekday, sign up for our Breakfast with ARTnews newsletter.
The Headlines
ONE THING IS CLEAR. This year’s Art Basel is going to be like none other. The fair is set to open in Switzerland in about three weeks, but some exhibitors have written a letter calling for the event to be canceled, citing the pandemic, the Art Newspaper reports. Basel’s global director, Marc Spiegler, has offered to create so-called Satellite booths for dealers who want to send art but not team members (Basel-hired staffers will helm those stands), and to roll over booth fees to 2022 for those prohibited from entering the country or subject to quarantine. The big question is how many people will show up on the Messeplatz to brave the not-uncomplicated vaccine and testing rules. The U.S., for one, has advised against non-essential travel to Switzerland. The U.S. has clocked 50 cases per 100,000 people over the past week to Switzerland’s 29.

IT IS A BUSY TIME FOR NAZI-ERA RESTITUTIONS. Amsterdam just said it is returning a Wassily Kandinsky to the heirs of a Jewish couple who sold it in 1940. Now the Georg Schäfer Foundation in Germany has said that an anonymous donor will pay the heirs of Max Liebermann for three pieces it holds by the artist, the New York Times reports. One of the works was a portrait of his wife, which was taken from her Berlin home in 1943 after she killed herself. The foundation has previously argued that it is the responsibility of the German government to provide compensation in cases where such works were acquired in good faith. Heirs of various Jewish collectors have alleged that some 20 other works in the foundation’s collection should be restituted because they were stolen by the Nazis or sold under duress.
The Digest
The Virginia Supreme Court has given the state government the go-ahead to remove Richmond’s towering statue of Confederate General Robert E. Lee. Residents had filed suit in an attempt to preserve the monument, which became a focal point of Black Lives Matter protests. [The Guardian]
An exhibit titled “Making History: Kansas City and the Rise of Gay Rights” was removed from the Missouri State Museum in the Capitol building in Jefferson City after it was criticized by a Republican lawmaker. Exact details of the move are not yet clear. Greg Razer, a Democrat who is the state’s only openly gay senator has condemned the action. [The Associated Press]

In England, a father and a son were sentenced to six and eight years, respectively, for stealing a variety of Chinese antiques from an elderly woman and selling them at auction. Three accomplices also received sentences. Their total haul is believed to have been about £1.72 million (about $2.38 million) for some 50 items over seven years. [Daily Mail]
Rising tennis star Reilly Opelka is a passionate art collector, and while he is in New York for the U.S. Open, he said he’s planning to stop by Gagosian, David Zwirner, and Vito Schnabel. An eight-foot-wide Friedrich Kunath hangs in his dining room in Florida. [Vanity Fair]
The vaunted In Situ restaurant at the San Francisco Museum of Modern Art has closed after five years. Run by chef Corey Lee, it operated a bit like an art space, showcasing the recipes of various chefs. “Our collection included over 100 dishes spanning more than 25 countries, 20 U.S cities, and almost 50 years,” it said in an Instagram post. [SFGate]
Rachel Dolezal was working a civil-rights activist when she was revealed in 2015 to be a white woman claiming to be Black, but she has also long been a practicing artist. Bustle reported on her art career at the time, and pointed out that one of her works appears to copy a famed Turner. Now Glenn Ligon has noted that another one of her creations seems to lift the exact aesthetic of some of his most famous text works. “Well, they say imitation is the sincerest form of flattery,” he wrote on Instagram. “Does that include blackface? Just asking.” Dolezal has said that she self-identifies as African-American. [@glennligon/Instagram]
The Kicker
IN WHAT MAY BE THE MOST BRITISH STORY OF ALL TIME, an artist named Nick Hugh McCann has unveiled a painting that he made—in secret, over seven years—of 148 regulars at a pub in the village of Sawley, England. BBC News has the details, and photos of the work, which is both awesome and surreal. It now hangs at the establishment, The Bell Inn. (Its title: A Few Down the Bell .) McCann worked from photos that he took of customers, and said his aim was to pay tribute to the pub and its supporters. “I think it’s really nice to have a picture in a normal place as opposed to a gallery,” he said. Agreed. [BBC News]