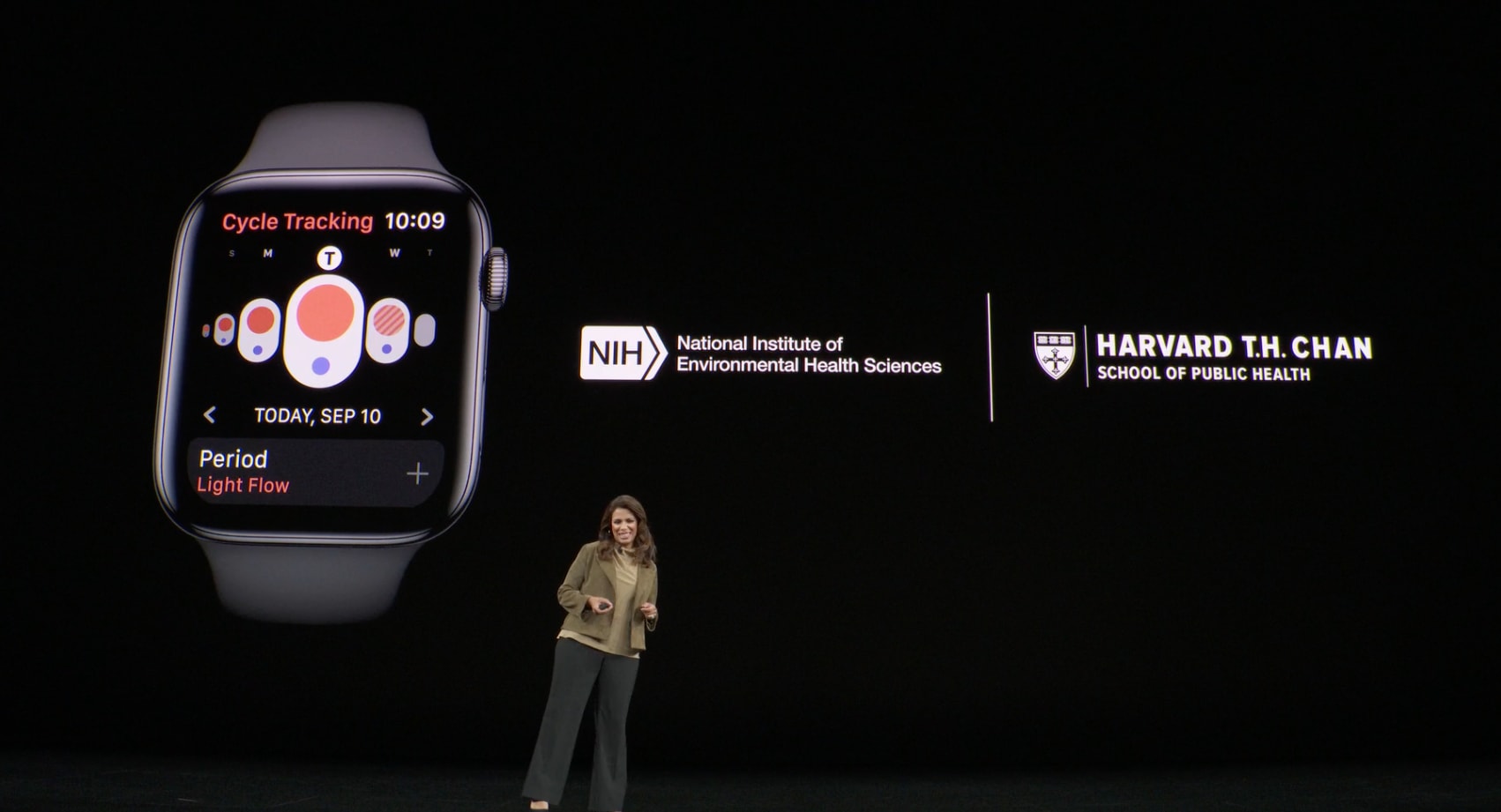 Apple launches more health studies using Apple Watch.Source: AppleApple revealed on Tuesday that it is going to oversee three new medical studies, in fields ranging from women’s health to hearing technology, using data from customers with Apple devices who choose to participate.The announcements continue Apple’s expansion into the health space, with initiatives ranging from medical studies to medical hardware and apps. It has hired dozens of people to its health team in the past five years, including doctors, engineers and scientists, but has also recently seen departures from its top ranks over differences in opinion. The health team’s leader is a high-ranking executive — the company’s chief operating officer, Jeff Williams — and CEO Tim Cook has said that Apple’s advances in health will be its greatest contribution to humanity. The company’s vice president of health Sumbul Desai made the announcement on stage at Apple’s annual fall hardware update, where it also announced a slew of updated products, including a new version of the Apple Watch and three new iPhones. Customers will sign up for the studies using a free Apple Research app that will be available to download later this fall.Apple’s new studies cover the following:Women’s health. The company has been gradually adding new features associated with women’s health monitoring in mind ever since 2014, when it got pushback from users when it announced its HealthKit service without reproductive tracking. It recently hired an obstetrician, signaling an interest in the space. According to Apple, the goal of the study is to study whether patients are at risk for common conditions, such as polycystic ovary syndrome, infertility, and osteoporosis. It will be conducted with Harvard’s T.H. Chan School of Public Health and the NIH’s National Institute of Environmental Health Sciences (NIEHS).Hearing. The goal is to study how sound exposure affects hearing over time, which is a relatively novel area of focus for technology companies. Apple said it is working with researchers at the the University of Michigan.Mobility. It is also looking at how how walking pace and steps climbed relates to heart health, quality of life and other factors. That research will be conducted in partnership with Brigham and Women’s Hospital and the American Heart Association.The studies indicates Apple’s interest in these areas, but doesn’t necessarily mean that it will release new products that cater to them. That might depend on the outcome of the study, and whether there is a potential to impact patient outcomes with the Apple Watch or devices. The wearables space is still nascent, and studies are underway to measure whether these devices can do more than helping generally healthy people stay fit.This isn’t Apple’s first foray into medical studies. Its health team has already commissioned research with collaborators at Stanford University into how its smartwatch technology can monitor the heart. This Apple Heart Study helped spur the company to release an electrocardiogram app and sensor in the Apple Watch to detect signs of heart rhythm irregularities. It has also announced studies on disease areas like autism and Parkinson’s Disease. All of these studies involve a research partner at an academic institution.Apple is far from the only technology company building a team in health care. Alphabet has numerous groups focused on the medical sector, including Verily, its life sciences unit, and Microsoft is building out a team to focus on areas ranging from medical research to artificial intelligence. Apple rival Fitbit has previously worked with academic partners on both women’s health and for research into how patients who reach milestones related to steps and activity levels can recover more quickly from common surgical procedures.﻿NOW WATCH: Apple unveils new Watch with an always-on display

Fauci says U.S. coronavirus outbreak is ‘going to be very disturbing,’ could top 100,000 cases a day