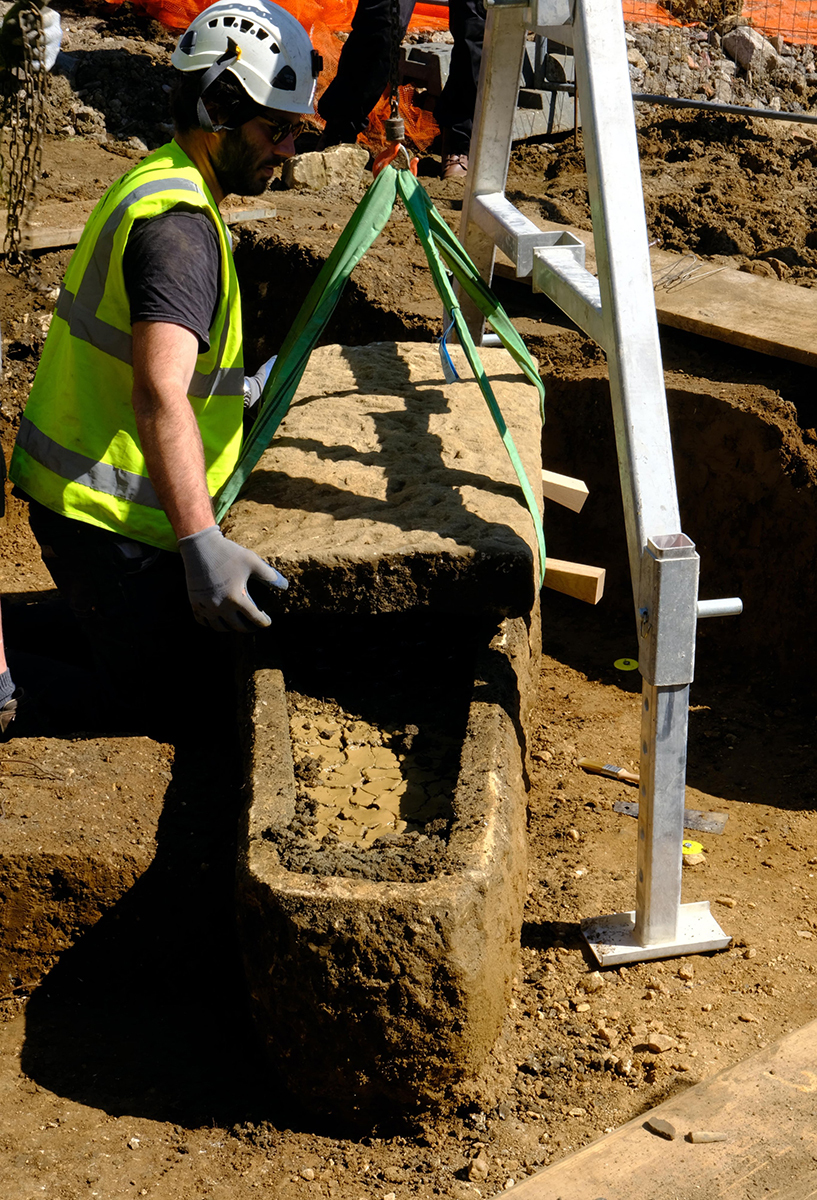 A 2,000-year-old stone coffin with two skeletons inside has been discovered on the grounds of Sydney Gardens in Bath, England. The Bath & North East Somerset Council announced the find on Monday, calling it a “rare glimpse into local burial practices” during the Roman era.
Sydney Gardens, once an 18th century Georgian “pleasure garden,” frequented by famed novelist Jane Austen, had been undergoing renovations and landscaping when a Roman wall was uncovered on the border of Bathwick Cemetery.
As a team from L-P Archaeology began to excavate the site, they discovered the 6½-foot-long coffin. The sarcophagus, made of limestone from the region, held two sets of human remains with one partial skeleton laying at the other’s feet, and faced north, indicating it was likely a pagan burial.

Artifacts recovered close to the grave include small red and blue glass beads, as well as a little pot filled with remnants of food, thought to be a votive offering. Additionally, archaeologists found the only cremation burial known to exist in Bathwick Cemetery.
“It isn’t often that you come across an in-situ stone coffin complete with occupants,” Kelly Madigan, partner at L-P Archaeology, said in the press release.
A 3D model rendering of the sarcophagus displays the dimensions of the structure, including its oversized lid. “The find offers a fantastic opportunity to use cutting edge scientific analysis to learn more about the lives of the individuals within the coffin, including where they originally came from and if they are related,” notes Steve Membery, senior historic environment officer for South West Heritage Trust, in the announcement. Lab tests are currently underway to determine the health and welfare of the individuals buried.
The Council is considering a display for the empty sarcophagus within Sydney Gardens once the remains are reinterred after analysis, alongside information about pleasure gardens and the Roman history of the area, including interpretations of these latest archaeological finds.
Ultimately, says Membery, “the discovery of the sarcophagus in Sydney Gardens shows why Bath deserves its international reputation for Roman archaeology and its designation as a World Heritage Site.”