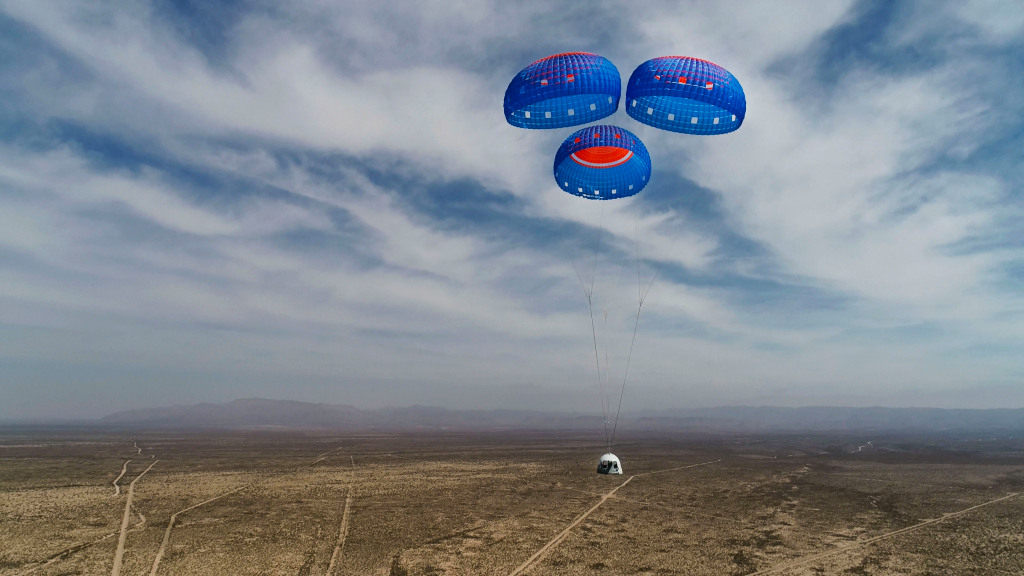 Last Wednesday, three portraits painted by the Vienna-based Ghanaian artist Amoako Boafo were launched from Texas into space. They floated in the void before coming back down to Earth just eleven minutes later. The launch of the “Suborbital Triptych” (2021) was a collaboration between the Jeff Bezos-owned aerospace company Blue Origin and the aerospace technology company Uplift AeroSpace.
The three portraits were painted directly onto pieces of a Blue Origin rocket and made with space grade paints. The paintings—Self Portrait with Pink, Tulips, Shormeh’s Gold Earrings and White and Gold Head Wrap—depicted Boafo, his mother, and the mother of a close friend. Upon their return, the paintings were all recovered and appeared to be in good shape.

Why launch art into space? Josh Hanes, the CEO of Uplift, argues that bringing in creatives is an important step in developing a multiplanetary economy, saying,
Uplift is focused on integrating with artists who have the ability to really connect with humanity. This recent project with Amoako Boafo was a unique way for the general public to connect with space since there’s an aspect of space exploration that is really hard for the general public to relate to.
The so-called “billionaire space race” between Jeff Bezos, Elon Musk, and Richard Branson, all of whom are attempting to corner a celestial market including space tourism, has garnered negative attention. Critics of these efforts have pointed out that the resources and funds being used for the three billionaires’ space travel would be better used to address the ongoing climate crisis or to ease the burdens of the global pandemic. More recently, when Bezos launched himself into space in mid-July, the trip sparked public outrage and was perceived as a tone-deaf flaunting of his wealth. Leading up to the launch, more than 150,000 people signed a petition asking that Bezos stay in space and never come back.
But through projects like Suborbital Triptych, aerospace companies hope to garner a more positive public perception. The paintings rode on the same rocket Bezos used for his trip to space, the New Shepherd, which the Amazon multibillionaire hopes will become the vehicle on which tourists take their own trips into the cosmos.

Uplift is helping companies like Blue Origin manufacture meaning for these new commercial pursuits. Before the launch, Uplift received a question from Ghanaian high schoolers who had been made aware of the project. They asked, “Why is space exploration important for the average Ghanaian person?” To which Hanes responded, “Exploring space allows us to produce knowledge, and knowledge is power. And so we can change the future for the better. And from space you can see Earth and realize how precious it is and that we should conserve it.”
Yet, even though Uplift AeroSpace promotes space exploration as a means for bolstering conservation efforts, the company says that they have not produced any data on the environmental impact of the launch. And the New Shepherd would have flown whether or not the paintings were included, as Blue Origin consistently sends vehicles into space to test New Shepherd.
Uplift AeroSpace is keen to note that even though art has been launched into space before (in fact, some works have even made it to the moon and Mars), Suborbital Triptych represents the first time an African artist’s work has passed the Kármán line into space. Uplift hopes that this will be the first of many Uplift Art x Space Programs. It is unclear which artist will represent this next phase in Jeff Bezos’s new venture.

Amsterdam to Restitute Kandinsky Painting to Heirs After Years-Long Dispute
Museum Director Elected President of Estonia: ‘I Promise to Be a Good Partner’
To Top
error: Content is protected !!