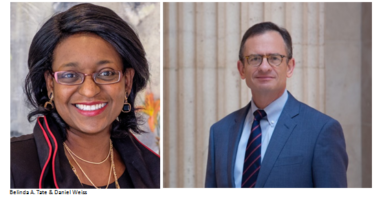 The American Federation of Arts, a New York-based nonprofit devoted to organizing and touring exhibitions for more than a century, has named two new members to its board: Belinda A. Tate, executive director ofthe Kalamazoo Institute of Arts, and Daniel H. Weiss, president and CEO of the Metropolitan Museum of Art.

AFA director and CEO Pauline Willis said in a statement,  “Dan and Belinda bring with them a breadth of knowledge and set of diverse perspectives that represent a rich cross-section within the museum world today. Their expertise is integral to the AFA’s goal of deepening relations with the full spectrum of the museum community.”

The AFA will travel 11 exhibitions to more than 30 museums over the next two years. Tate said, “Exhibitions organized by the AFA have always had a tremendous impact on me personally, most memorably ‘In the Spirit of Resistance’ from the mid-’90s, which was the first exhibition to examine the influence of the Mexican muralists on the work of African American artists from the 1930s to 1950s.”

Weiss added, “At a time of increasing interest in the work of museums, along with the challenges of a rapidly evolving society, the importance of the AFA has never been greater.”