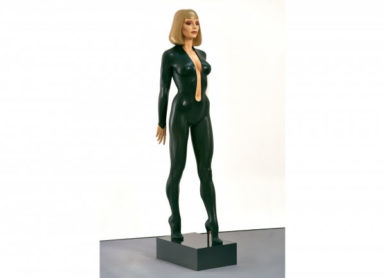 The British Pop artist Allen Jones has joined Almine Rech gallery, which will represent him in France, Belgium, and China, where it will open a new space in Shanghai later this year. The enterprise, which also maintains spaces in New York and London, will show Jones’s work at Art Basel next week, and the artist’s first solo show with the gallery will open at its Paris location in October.

Represented as well by Marlborough Gallery in New York, Jones is perhaps best known for his controversial sculptures that turn women’s bodies into furniture. Many of his paintings also focus on enactments of submission and domination; some of them are informed by fetish-wear catalogues.

A pioneering figure in the Pop art movement, the artist represented the United Kingdom at the 1963 Paris Biennale, where he received the Prix des Jeunes Artistes. His work has been surveyed at the Serpentine Gallery and the Barbican Art Gallery, both in London, and the Walker Art Gallery in Liverpool, England. More recently, his work has been the subject of solo exhibitions at Tate Britain and the Royal Academy of Arts.

Jones’s works are held in the collections of Tate and the Victoria & Albert Museum in London, the Stedelijk Museum in Amsterdam, the Museum of Modern Art in New York, and the Hirshhorn Museum and Sculpture Garden in Washington, D.C., and elsewhere. He created large-scale murals for the hosiery retailer Fogal in Basel and Zurich, and 32-foot-tall sculptures for the Yuzi Paradise Sculpture parks in Shanghai and Guilin, China.