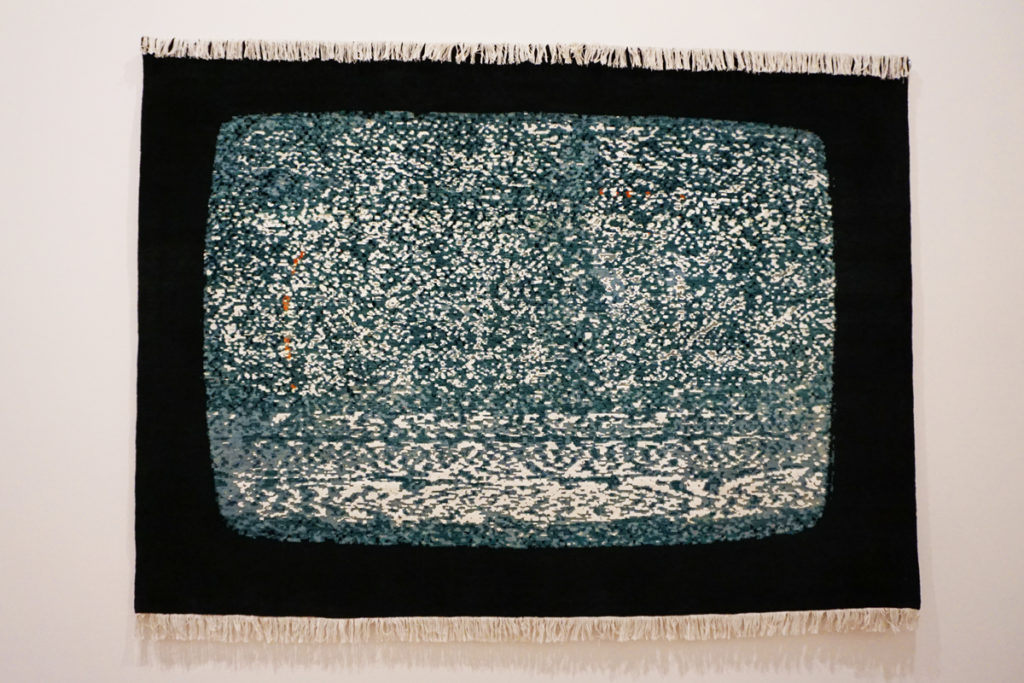 The 2019 Whitney Biennial opened on Monday to members of the press in New York. Curated by Rujeko Hockley and Jane Panetta, the exhibition features 79 artists who work in America. Below, a few favorites from first impressions 0f the show. —The Editors 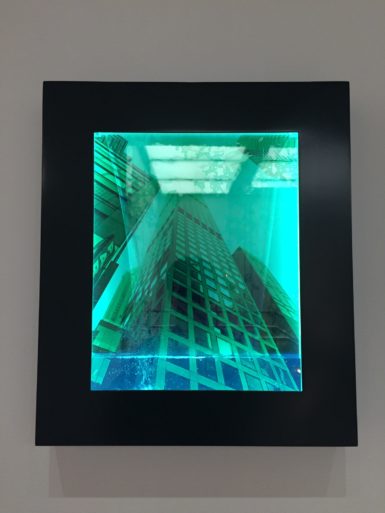 Water and artwork don’t mix well (more often than not), but they make a nice pairing in new pieces by Josh Kline. On the fifth floor, Kline is showing eight works, each involving a photograph being destroyed, slowly but surely, by sprays and dribbles of water that run across the insides of their glass frames. The pictures of Kline’s own taking range in subject matter—one is a low-angle shot of a New York skyscraper, another is an image of a wilted-looking American flag blown around its pole. The photos are lit in sickly neon shades by LED lights that, according to a wall text, correspond to bottles for pharmaceutical drugs.

In the past, Kline’s masterful installations have dealt with the fall of late-capitalist enterprises, weaving in smart meditations on the increasingly important—and often increasingly terrifying—role that digital technology plays in daily life. These new works aren’t so much about machines, however, as they are about technology’s opposite—natural forces that can’t be tamed. They recall the constant threat of climate change and the impending doom associated with it. Water can be a force of destruction—and also renewal. It’s like Kline is trying to wash today’s troubles away to create a better tomorrow. One photo features an image of Twitter’s San Francisco headquarters; the way Kline has displayed it, it looks as though a cascade of water is filling an office. Maybe a post-Twitter world would be a better place. —Alex Greenberger

Outside on the Whitney’s fifth-floor balcony, four video screens are nestled in viewing stations that make up the “video viewing garden” MISSION TEENS: FRENCH SCHOOL IN MOROCCO (2019) by Meriem Bennani. One half of the installation is Ponytail (2019), which follows a group of teenage schoolgirls in the Moroccan capital of Rabat. The teens say things that are impudent and cheeky (“My mom calls me, like, every minute!”), but they grow introspective as they begin discussing feelings of insecurity about their own identities while at school. It’s shot in a documentary aesthetic that the artist likens to reality television.

Nearby is Neighborhood Goggles (2019), a pair of monitors encased in cutouts shaped like binoculars. Both screens display a command set against a swirling background: “Push button to start.” Once started, the videos show houses that sport mouths and begin rapping lines like, “I was bought by an embassy.” (Rapper Lil Patty was enlisted by Bennani to offer these homes their voices.) Soon the music changes and one singsongy house intones, “But still I feel alone.” Their laments are heartfelt and humorous in equal measure. —Annie Armstrong

Defense Against the Dark Arts 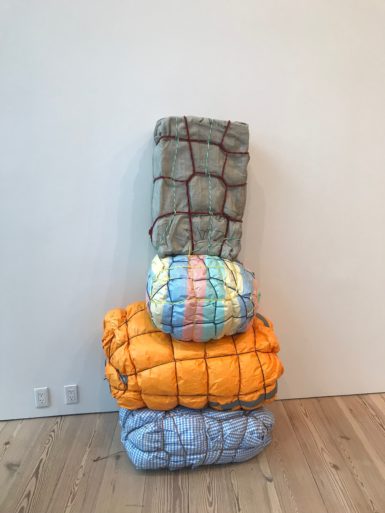 On the sixth floor, Maia Ruth Lee has affixed dozens of steel forms to a light blue wall. Meticulously organized in a salon-style arrangement and varied in shape and size, these metal fragments once were part of fences and windows around New York. Accompanying the presentation is a chart that recalls astrological guides found in magazines and books. The flyer, which has a section titled “The Nine Tools for Self-Defense,” instructs readers on how to protect themselves from their own fear, anger, deception, stress, hate, and jealousy, among other emotions that have been attributed to nine of the steel glyphs on view. (One glyph taking the form of a straight line bent at a right angle comes with the admonition “Enhance Communication: Stop talking and start speaking.”) By way of the flyer, the steel pieces, which previously existed as architectural elements, are afforded greater spiritual resonance and power.

Nearby, Lee is also exhibiting Bondage Baggage Prototype 4 (2018), a vibrant sculptural amalgam of tarp, rope, tape, luggage, bedding, and clothing. The work is part of a series focused on luggage belonging to Nepalese migrant workers in the Middle East. Four distinct bundles are stacked atop each other in Lee’s meditation on the ways that oppression, displacement, and personal histories are often intertwined. —Claire Selvin

Nicholas Galanin’s White Noise, American Prayer Rug (2018) is a disquieting kind of curio right off the elevators on the sixth floor. The image, pictured above, is recognizable to anyone who has experienced the phenomenon of an old TV on the fritz, and its rendering in the form of a woven rug plays on the ways such an evocation is fuzzy (in terms of its subject matter as well as the fibers with which it was made). It’s intensely abstract yet instantly familiar, and in the synesthetic way that poet/artist/theorist Fred Moten writes about so well, to see it is to hear it (in all its signal-scrambling sense of noise and din).

The wall text cites Galanin asserting that “whiteness as a construct has been used historically throughout the world to obliterate the voices and rights of generations of people and cultures regardless of complexion.” And it seems to mesh especially well with a bit of the curators’ wall text, on the show as a whole, nearby: “An emphasis on the artist’s hand suggests a rejection of the digital and the related slick, packaged presentation of the self in favor of more individualized and idiosyncratic work.” —Andy Battaglia

A Tour of the 2019 Whitney Biennial in 20 Photos -ARTnews
Christie’s Imp-Mod Sale Brings in Market-Affirming $399 M., With Records for Balthus and Pierre Bonnard -ARTnews
To Top
error: Content is protected !!