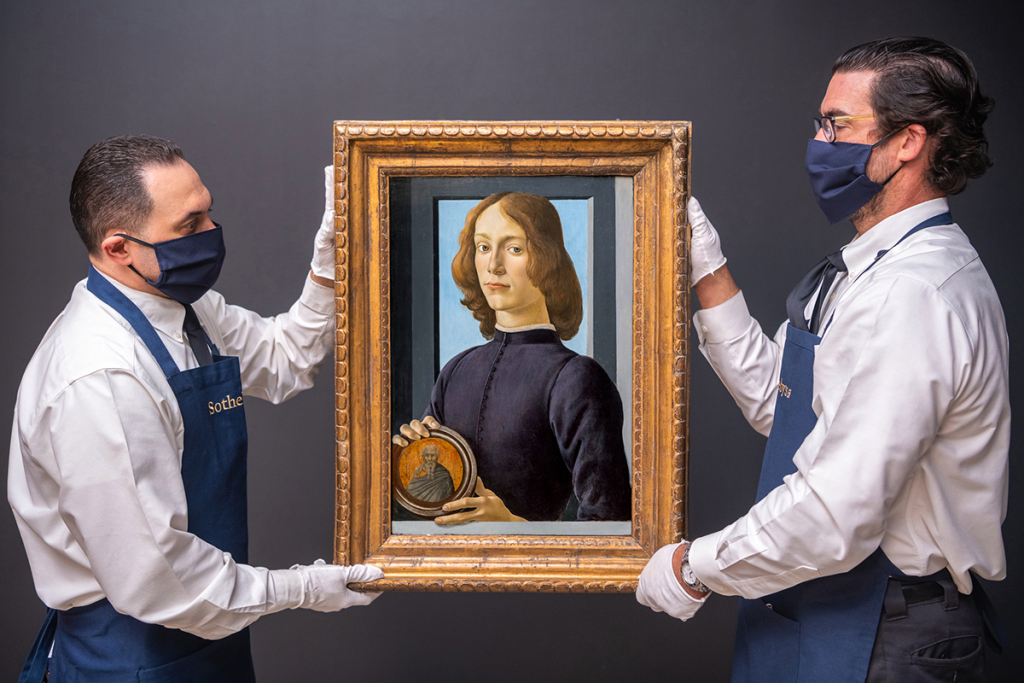 To receive Morning Links in your inbox every weekday, sign up for our Breakfast with ARTnews newsletter.
Market
A rare 15th-century portrait by Renaissance master Sandro Botticelli will be auctioned at Sotheby’s next year—and could break records if it sells for an estimated $80 million. [ARTnews]
In a complicated legal battle, a group of European art insurers are asking a U.S. federal court to dismiss a lawsuit brought by a New York art dealer over a policy claim related to 12 works that were seized from a Modigliani exhibition in 2017 as possible fakes. [The Art Newspaper]

Alexander Klabin, a former hedge fund manager, is no the executive chairman Sotheby’s Financial Services, where he’ll oversee its art financing branch. Klabin will also have a financial stake in the auction house. [Art Market Monitor]
News
After racking up $5 million in attorney fees, the two foundations battling for the estate of Robert Indiana have reached a settlement. [The Art Newspaper]
The American Museum of Natural History in New York fired a curator after an investigation determined that he had sexually harassed a graduate student he was supervising. [The New York Times]
The American Folk Art Museum in New York has received a trove of 500 works by self-taught artists—from Thornton Dial to Martín Ramírez—from collector Audrey B. Heckler. [The Art Newspaper]
The Metropolitan Opera has canceled its 2020–21 season, and will return next September with Terence Blanchard’s Fire Shut Up in My Bones, an adaptation of columnist Charles M. Blow’s memoir. [The New York Times]
Art & Artists
A Chinese woman has created a series of brazen public art protests to try to free her husband from prison. One action involved rolling giant inflatable balls across a suspension bridge. [South China Morning Post]
Yxta Maya Murray writes about “Ming Smith’s pioneering excavations of Black femininity.” [The New Yorker]
When the Institute of Contemporary Art San José opens for four days to serve as a polling site, it will also debut a 50-foot mural by artist Amir H. Fallah. [The New York Times]

For the latest entry into his “Great Works, In Focus” column, Sebastian Smee writes Chéri Samba’s 2004 painting Problem of Water, which currently hangs in the Museum of Modern Art in New York. [The Washington Post]
Kelly Crow looks at an exhibition of new work by Puerto Rico–based duo Allora & Calzadilla at the Menil Collection in Houston.  [The Wall Street Journal]
More
The coronavirus shutdown has had an outsized impact on the performing arts. Here’s a look at the cultural activities that would have taken place this coming weekend and the stories of the people impacted. [The New York Times]
Read a review of Van Gogh Alive! at the Royal Hall of Industries in Sydney, which “is essentially a walk-through sound and light show that projects Vincent Van Gogh’s works on to the walls and floors of the giant exhibition hall.” [The Guardian]
A new art event, called Silicon Valley Sculpture, will bring around 30 outdoor sculptures to Menlo College each year. [San Francisco Chronicle]
A new film about an artist couple whose lives are upended by a dementia diagnosis gets a scathing review. Jeannette Catsoulis writes, “The best, perhaps the only reason to see The Artist’s Wife is Lena Olin, an actor incapable of giving a so-so performance.” [The New York Times]