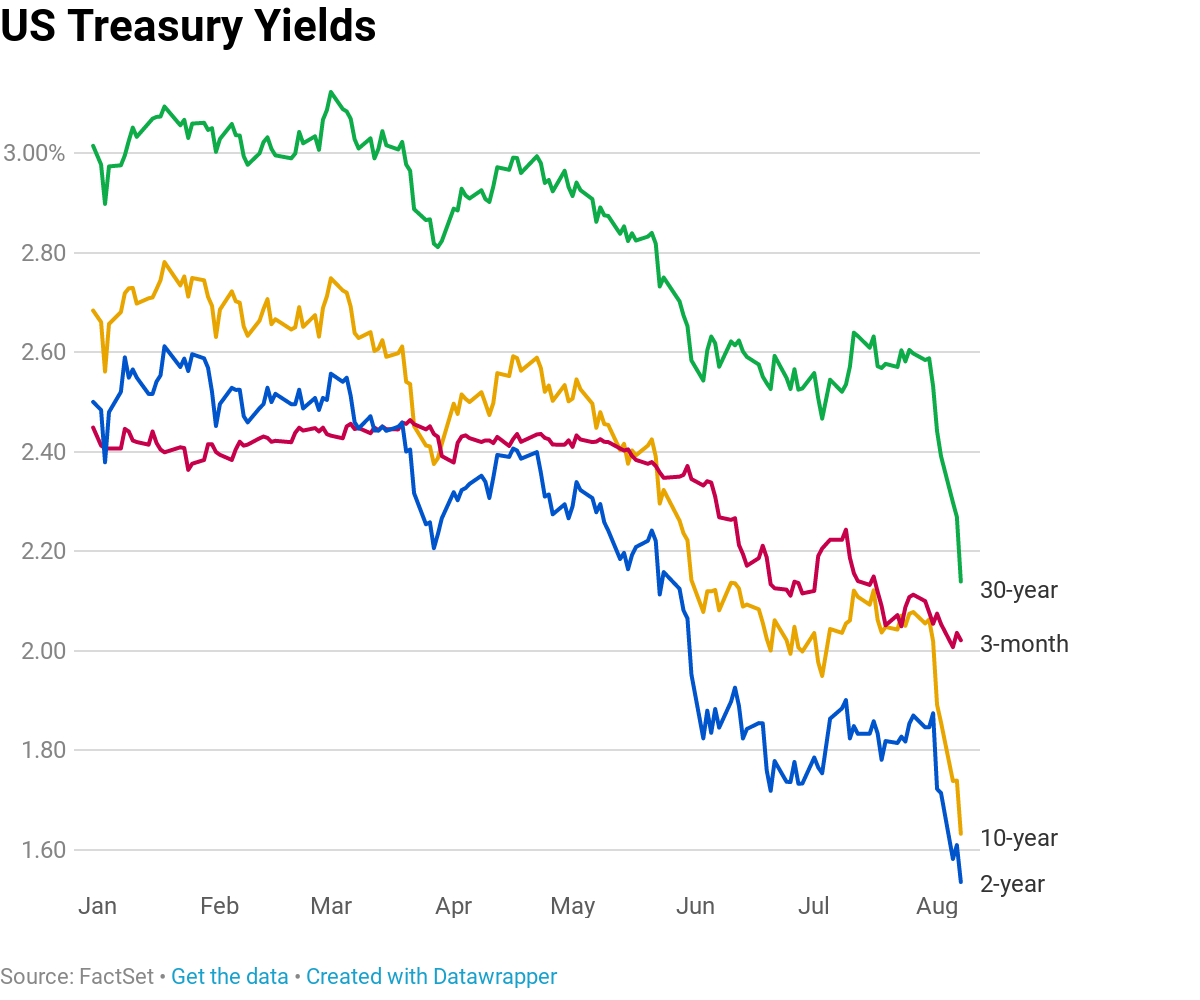 U.S. stock futures were pointing to a lower Friday open on Wall Street after a powerful rally Thursday capped three days of gains for the S&P 500 that wiped out Monday’s plunge. The S&P 500 and Nasdaq actually turned higher for the week ahead of Friday trading, while the Dow Jones Industrial Average was just shy positive territory. The catalyst behind Thursday’s advance was stabilization in 10-year Treasury yields around 1.7% after sinking to three-year lows below 1.6% Wednesday. On Friday, the 10-year yield dipped slightly below 1.7%.

This week’s flight from stocks to bonds on U.S.-China trade and currency worries were weighing on the Treasury yield curve — the obscure plot of U.S. interest rates based on maturity dates — and threatening to send 10-year rates below 2-year rates. An inversion of the 2-year and 10-year yields has preceded every recession over the past 40 years. Other parts of the yield curve have been inverted for months, with the rate on the 3-month Treasury bill first rising above that of the 10-year note in March.

Shares of Uber were plummeting around 7% in the premarket Friday morning after the ride-hailing giant reported a per-share loss of $4.72, which was much worse than expected. Revenue of $3.17 billion also missed analyst estimates. Shares of Uber, should they open at their indicated levels, would be nearly 12% below their May initial public offering price of $45 each. On Wednesday, smaller rival Lyft reported lower-than-expected losses and higher-than- expected revenue and gave a rosier outlook for the rest of 2019. Shares of Lyft, however, were about 15% below their March IPO pricing of $72 each.

Putting into perspective Uber’s staggering $5.2 billion second-quarter loss, only three companies in the S&P 500 — General Electric, Kraft Heinz and Newell Brands — lost that much money in all of 2018. Uber attributed most of its quarterly deficit to stock-based compensation. Excluding that expense, Uber’s losses were around $1.3 billion, or roughly 30% wider than the prior period. High stock-related compensation costs are normal for Silicon Valley companies as a price of luring top talent.

Goldman Sachs is casting a wide net for customers of its new credit card with Apple, approving some subprime borrowers. The bank, known for its rich and powerful clientele, is in charge of deciding who gets the Apple Card, and it’s accepting some applications from users with less-than-stellar credit scores, according to people with knowledge of the matter. Goldman began to make the card available to some Apple customers this week, ahead of a broader rollout later this month.

Broadcom acquires Symantec enterprise business for $10.7 billion
Wheels Up valued at $1.1 billion in latest funding round
To Top
error: Content is protected !!