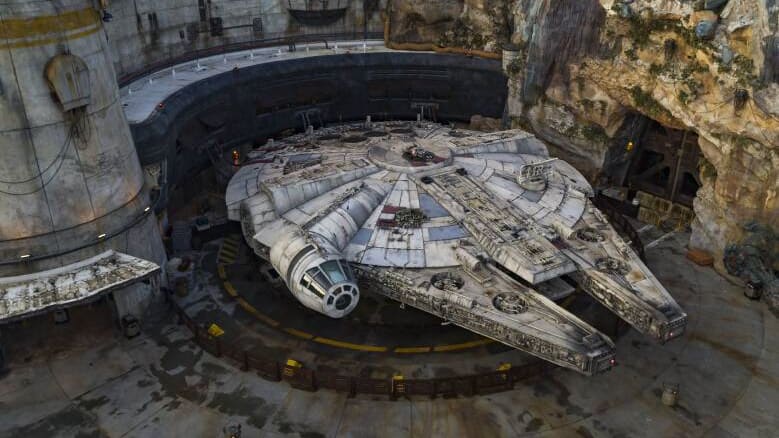 During a media event in Orlando, Florida this week, the Bob Chapek, chairman of parks, experiences and products at Disney, praised the Imagineers behind the massive billion-dollar undertakings.

“Every aspect of this land, from the droid tracks on the pavement to the spires that reach the sky, is 100% authentically Star Wars,” he said. “And every experience, from visiting the Cantina for a glass of blue milk to piloting the Millennium Falcon, to interacting with your favorite characters, immerses you deeper into your very own Star Wars story.”

While both the California and the Florida park lands were under construction at the same time, Chapek said the team of Imagineers learned a lot from the Anaheim launch in May. He said the company was able to use the experience of running Batuu 3,000 miles away when putting the final touches on the Orlando location.

Here are the four biggest takeaways the company learned from California:

For the first month that Galaxy’s Edge was open in California, fans had to make reservations to enter the land. The company permitted guests to wander the land in four-hour increments, an attempt to keep crowd sizes under control and to get a sense of how people would interact within Batuu.

Once that month was over, Disney opened up the park to all guests visiting the Disneyland park. However, it blocked out annual passholders. This was a way to ensure that crowds would not become overwhelming.

Disney did not institute a reservation system for park entrance in Orlando, however.

“We probably didn’t need to constrain attendance purposefully as much as we did because the attraction works so darn well,” Chapek said. “Always err on the side of the guest experience and making sure those guests are satisfied. Now knowing that, we will not put on ourselves the same constraints.”

Visitors to Black Spire Outpost fill the Marketplace on opening day at Star Wars: Galaxy’s Edge at Disneyland in Anaheim, CA, on Friday, May 31, 2019.

To handle the massive crowds on Thursday, shortly after 6 a.m., the company instituted its virtual queue for parkgoers to gain entry to the land.

The estimated wait time for Millennium Falcon Smugglers Run was around 300 minutes, or five hours, although several parkgoers said Disney’s cast members said the ride had a 10-hour wait time. There were also reports of long lines at the milk stands and at some merchandise locations.

Another big learning curve for the Imagineers was the high demand from guests to saddle up to the bar at Oga’s Cantina.

At the end of June, Disney announced that reservations to get into the land were no longer required. However, guests that wanted to set foot in Oga’s Cantina or Savi’s Workshop — where guests can build a lightsaber — need to enter a virtual queue. At the Anaheim park, Disney opens the online reservation system for these experiences each day at 7 a.m. local time.

Reservations can be made through the Disneyland app or through the park’s website and a deposit will be required.

For Oga’s, a fee of $10 per person must be placed when a reservation is booked. However, Disney only charges if the guest doesn’t check in for the time slot. Parkgoers have 45 minutes in the cantina and at least one person in the group must be over age 14.

The interior of Oga’s Cantina at Star Wars Galaxy’s Edge.

At Savi’s Workshop, the deposit is $199.99, or the full cost of the experience. Like Oga’s, the deposit at Savi’s will be forfeited if the guest doesn’t show up.

“Reservations are nontransferable and may not be sold or bartered,” the company posted on its website. So, be prepared to show a reservation confirmation, a photo ID and the credit card that was used to book the experience. Disney wants to prevent people from making reservations and then reselling them to other guests.

Chapek said another thing that became very clear, very quickly in California is that the company needs to stock more merchandise.

Cast members in California told CNBC that items like Sabaac cards, Lothcat dolls and First Order flags were sold out and it wasn’t clear when the items would be back on shelves at the Black Spire Outpost. Kyber crysals and certain droid parts were also among items that were hard to find in the park.

A bartender at Oga’s said the cantina has been sold out of its Rancor Teeth beer flights since the second week after opening and it hadn’t been restocked since.

Chapek said that Orlando’s Galaxy’s Edge is fully stocked and ready for guests to arrive.

Fans were also very eager to try out the dairy-free green and blue milks sold in the land. Chapek said the company discovered that it needed to have more than one location that sold the thirst-quenching libations in order to meet demand.

When you ask cast members and guests which colored milk is better, you’ll get a variety of answers. However, it seems that people are either in favor of one or the other, never both. You’ll have to take a sip to determine which one is more suited to your palate.