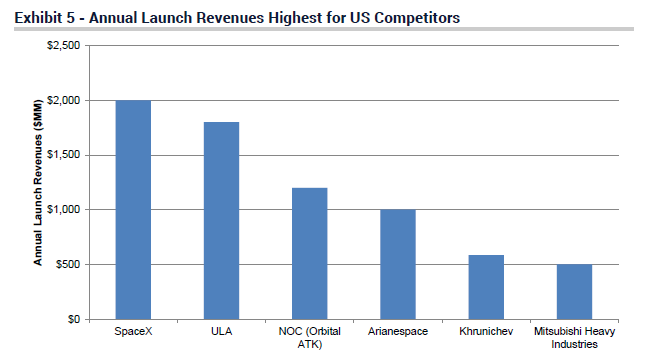 A SpaceX Falcon Heavy rocket, carrying the Arabsat 6A communications satellite, lifts off from the Kennedy Space Center in Cape Canaveral, Florida, April 11, 2019.

SpaceX has hurtled to the top of the launch industry over the past decade, last year bringing in more revenue than any other rocket company, according to Jefferies on Sunday.

“While SpaceX is newer to the market, their lower price point has allowed them to outpace peers in estimated annual launch revenues,” Jefferies analyst Sheila Kahyaoglu wrote in a note to investors, in a “deep dive” report.

Jefferies broke out the estimated 2018 revenues for eight “heavy launch” companies, which compete in the most expensive part of the rocket market. The massive rockets, standing as tall as skyscrapers, cost anywhere between $62 million to $350 million. Jefferies charted last year’s launch revenues for SpaceX, United Launch Alliance (also known as “ULA,” a joint venture of Boeing and Lockheed Martin), Northrop Grumman, Europe’s Arianespace, Russia’s Khrunichev, India’s ISRO and Japan’s Mitsubishi Heavy Industries. Jefferies also included Blue Origin as a competitor, although its New Glenn rocket is not expected to launch before 2021.

SpaceX logged $2 billion in launch revenue last year, the report said. In total, Jefferies estimated these companies’ rockets brought in about $8 billion in revenue in 2018.

Jefferies said SpaceX, as a relatively new entrant, has helped introduce “a level of price competition, which is a positive for launch market customers.” These rockets largely cater to “a government market,” where ULA and the internationally-backed companies have previously dominated.

SpaceX is also the front-runner, in Jefferies’ view, for lucrative Air Force contracts expected in 2020. Under the military’s National Security Space Launch program, officials will name two companies to launch five years of government satellites. SpaceX, ULA, Northrop Grumman and Blue Origin are all competing for the contracts. The money means the winners will “also have a leg up in developing a new launch system that could have applications for commercial uses,” Jefferies said.

With 25 launches up for grabs, the Air Force has said one company will win 15 missions, while another will win the remaining 10.

“The biggest strength for SpaceX likely lies in its price and track record,” Jefferies said. “Given the current launch cadence, their business case is likely to be strongest given the ability for overhead absorption.”

From hiring parties to tuition, restaurants get creative to woo talent
DOJ reportedly has antitrust concerns around Sprint-T-Mobile merger
To Top
error: Content is protected !!